For this final exercise of Project 8, we are to construct a grid of any size, then try some of the following ideas:
I thought for some time about what to use for my grid, using what I have available, as finances are tight.  I was interested in wrapping a shape with woollen yarn and felting it so that it became a rigid structure, but there's wasn't the time to experiment getting the technique right with assignment deadlines approaching. (The suggested total time for all 4 exercises in Stage 2 is 6 hours). Other ideas I had were: fusing plastic fibres into a grid by ironing between baking parchment, removing some of the slats from a bamboo mat or weaving into the punched holes of paper or Jacquard loom cards. I also considered weaving found materials into the chain link fence at the back of the house, or the metal mesh garden table and chairs, or even structures in public places.  I liked the idea of documenting how the weaving would alter over time.

These thoughts of transformation over time led me back to my rust theme and some of the interesting rusted grid structures I've come across over the last few months.
﻿
I've banked some of the ideas for another time and decided today I wanted weave into some kind of metal grid.  After a search I found a small packet of a product called MeshTex. I don't know where this came from, or what it's meant for, but it had holes large enough to pass thread through. I wound off some natural fibres from my stash - wool, cotton and silk - and soaked these in either tea or vinegar.  The plan was that after contact with metal objects, over time, the appearance of the yarns would change.
Unfortunately I had no idea whether this piece of MeshTex was an iron alloy, or coated with something corrosion resistant, so it might not rust at all (would magnetic attraction be an indicator?). I held it with tongs over a flame on the hob which I suspected would change the surface at least, if not accelerate any corrosion. After a few seconds it took on the kind of rainbow oil slick effect.

I continued, weaving freely, adding some yarns that were already rust dyed after being used to bind parcels for my previous rust prints, some brass wire that I knew would not corrode (for a contrast) and attached the washer and keys that I'd rusted already.  When I added the clips to hang, and the safety pin 'fringe' it began to take on the feel of a traditional sampler.


Finally, I wrapped it in layers of cotton and silk fabric which again had been soaked in tea or vinegar.  Between the layers of fabric I added other smaller pieces of MeshTex and some other rusted items, imagining opening it up in a few weeks like a pass the parcel. The package was placed on a rusty bun tray inside the plastic wallet and is now in the greenhouse 'cooking'.
When I'd mentioned my rust project to my tutor, she told me about a visit to a textile museum in Lyon where she saw amazing cloths. Gaulish women had been buried in their clothes and their bodies excavated.  Incredible patterns were transferred onto the cloth as a result of contact with rust and other underground substances.  She has suggested I try burying some wet fabric.  The idea of burying wrapped metal objects is also mentioned by Holmes (2010) in Creative Recycling in Embroidery, which I've been reading during these exercises, and I was keen to have a go.
Some of my favourite rust prints have resulted from wrapping fabric around the top of a used, cleaned disposable barbecue. The metal is easy to roll up and manipulate.  I've used it a few times now so it has degenerated and is quite brittle but I thought it was strong enough to weave into and it would be interesting to see how both the weaving and the cloth would change after wrapping and burying.  Below are some of the prints I've made from it so far.
As with the MeshTex weaving, I used a combination of items I'd already rusted along with new yarns soaked in vinegar or tea.  Even as I worked, the colour of the yarns began to alter as they came in contact with the rust. 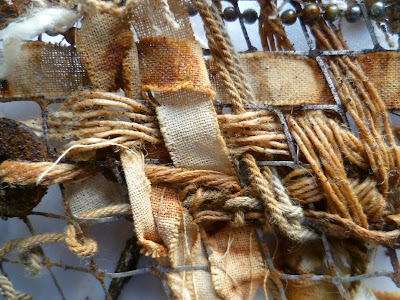 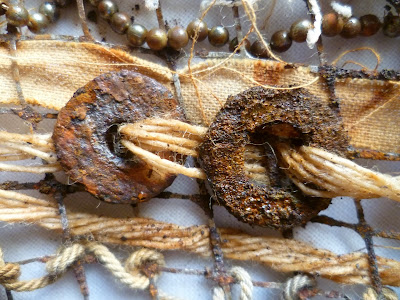 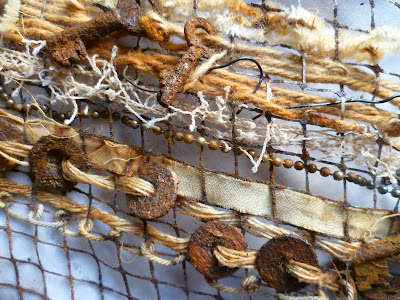 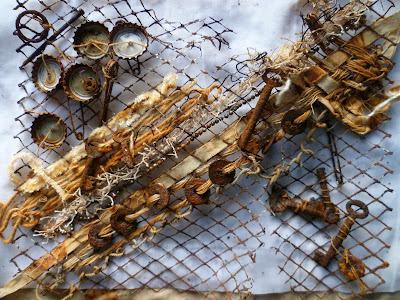 I particularly liked the slightly nautical look of the threaded crusty washers, but as the weight built up, the brittle metal of the grid began to snap so the bottle tops and keys that I'd intended to weave with, I instead threaded individually onto the strongest areas.  In one corner, I tried weaving yarns in the opposite direction, but by this stage I was beginning to find the materials unpleasant to work with.  The vinegary smells were overwhelming, the grid was sharp and the metal objects were gritty and dirty and staining my hands. It was time to wrap the parcel for burial.  This is made up of the weaving and several layers of cotton and silk, which I read are materials still used for burial shrouds (or winding cloths).


I have no idea whether I should have soaked the fabric in vinegar or tea, or just left it to be affected by the substances found naturally in the soil.  Or, how long it might take for marks to develop, or how deep to bury, or near to which plants. I can only wait and see. 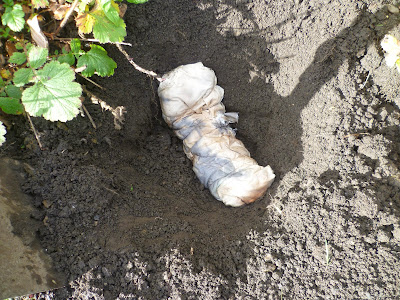 After I'd dug a hole at the back of the garden, where the sunflowers have been and the soil is deep. I placed the package in.  Looking down, it felt quite disturbing as the form looked vaguely human.  Whilst I been digging I'd hit a large stone that I thought I'd use to mark the spot to dig up in a few weeks' time.  Placing the flat stone on top, I felt like I was laying a gravestone!  ﻿ 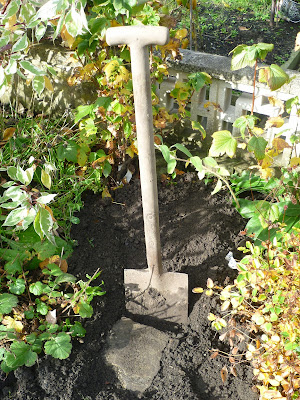