In this exercise we are asked to weave with strips of thin paper or card, and then explore some other possibilities such as varying the materials or the size and shape of strips.  For each exercise in Stage 2 the advice is to, 'Concentrate on developing interesting structures, colour combinations or contrasts of texture.'

To begin with I tried a regular weave of magazine pages, to get a hang of the technique.  The strips were positioned randomly so there was little sense of the original whole image.  If I were to do this again, I would try keeping the strips in their original order and be more selective about the images.  For instance, I would like to see the effect of trying images which had strong colours in the centre becoming paler round the edges. I imagine that using paper that graduates in colour could be used to create optical illusions, particularly if the weft was made at a diagonally, instead of at a right angle. 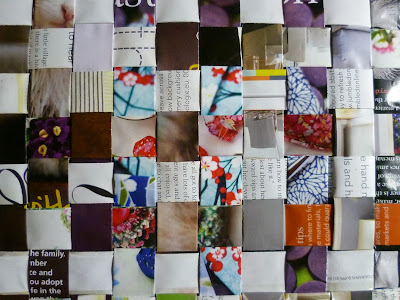 Next I cut strips from a mark-making exercise in Assignment 1 and this time I did keep them in their original order but I made the warp strips thicker than the weft.  I liked the resulting sense of movement and I then tried altering the angle of the weft strips to increase the energy as much as I could.   ﻿ 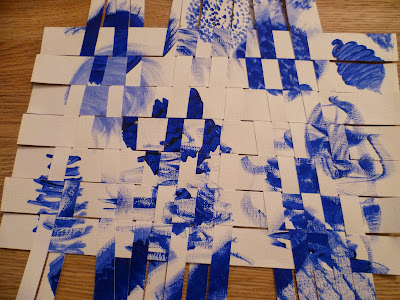 Next I wanted to try weaving with patterned papers.  I tore strips from a striped paper bag, so the width of strips varied naturally but the weaving still felt too regular.  When I tore further narrower strips and posted them under both the warp and weft I really liked the more natural basket effect created by the torn edges and the unevenness of the stripes which reminded me of branching twigs. 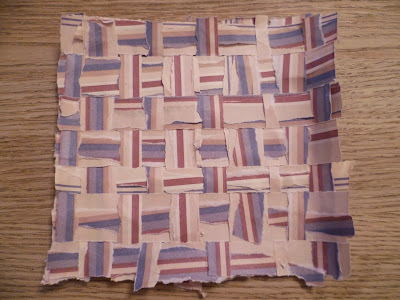 For the next weaving I used a rotary cutter to cut strips with scalloped edges and wove a third patterned paper diagonally at random.  The first weave limited the angles of the diagonals and gave a kind of overlapping grid effect.
﻿ 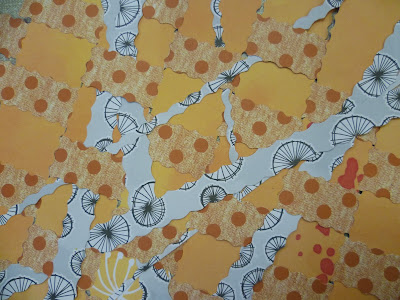 The possibilities were endless but I was ready now to try a different material and found some metallic foil sheets designed for embossing.  These were easy to cut with a craft knife and as I began to weave I began to really enjoy handling the pliable material.  The warp strips could be lifted and stayed in place while I wove and bending them backwards produced a tight weave.  The edges were simply folded back and everything held nicely in place. 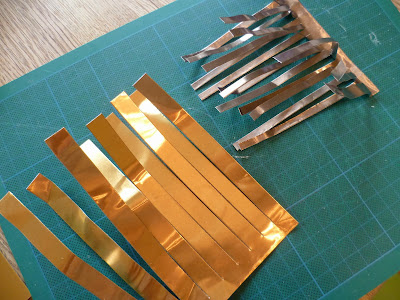 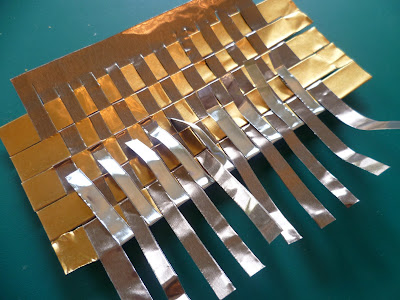 Trying a softer material against the metal was something I wanted to do next﻿.  I can't remember exactly what it was (possibly Lutrador?) that I'd once painted, heated and backed with Stayflex to create a book cover.  However, it cut easily and as I'd put a little gilding wax on, this gave a shimmer that I felt, along with the paint colours, complemented the copper coloured foil. 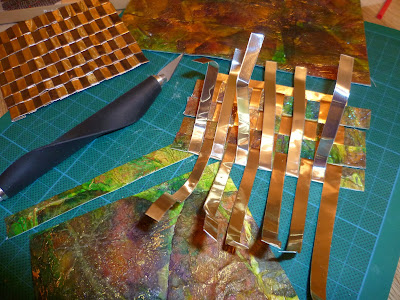 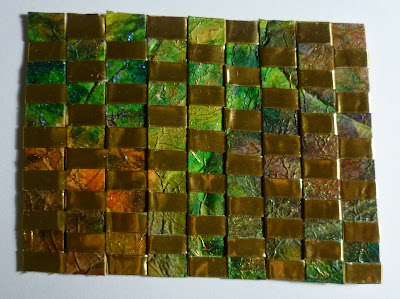 I tried one final combination using this combined with two shades of foil. (Being so reflective, it's difficult to get an accurate representation of the colours.) ﻿ 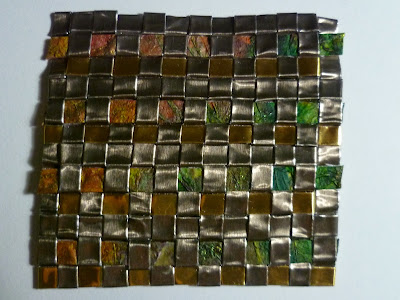 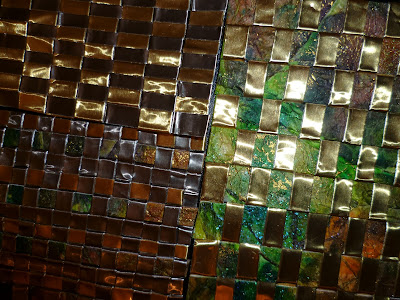 The foil is a material I've enjoyed and would like to explore further in future. The woven surface feels considerably stronger than the original sheet and the surface created can be folded and curved to become three dimensional.
I tried heating the sheets over a flame to see if the surface colour would change but nothing happened besides a toxic smell!  I imagine drinks cans could work well and introduce colour and pattern, or cleaned out tomato paste tubes which I have tried embossing and heating before.  (Heating them created a wonderful rainbow effect that reminded me of oil on water.)  Using recycled materials appeals as the foil sheets are very expensive and would limit my scale.  Embossing or distressing the metal before or after weaving could be interesting as this would affect the reflective qualities.  Perhaps I will try some of these ideas to link into my 'Rust' theme.
Posted by LizzyB at 15:05