At the Halifax Branch of the Embroiderer's Guild, Claire Tinsley, founder of patchwork and quilting supplier Hannah's Room, came to give us a talk, followed by a workshop.  'From Scraps to Accolade' was the story of the quilts she has made over the years, beginning with the patchwork cot cover she made for her new baby, the dress she made herself for a wedding when she was a hippy and a large bed quilt she made while trying out the Trapunto technique.


Some years on, when Claire was immobile, recovering from a car accident, she began to take a more serious interest in quilting and entered her first competitions.  It took a little time to get to grips with the strict rules and some of her early entries were dismissed with comments regarding 'inappropriate hanging' (tabs on a pole), 'incorrect tension' and 'inappropriate background' (hand-dyed). Undeterred, Claire continued to be experimental with her techniques in the traditional world of quilting.  Even when one of her quilts won 1st prize at Harrogate there was criticism from some camps because she had incorporated hand painting!
These days, Claire is a judge herself and winner of numerous prestigious awards nationally and internationally.  She had brought along many of her stunning quilts to demonstrate some of the techniques she uses. 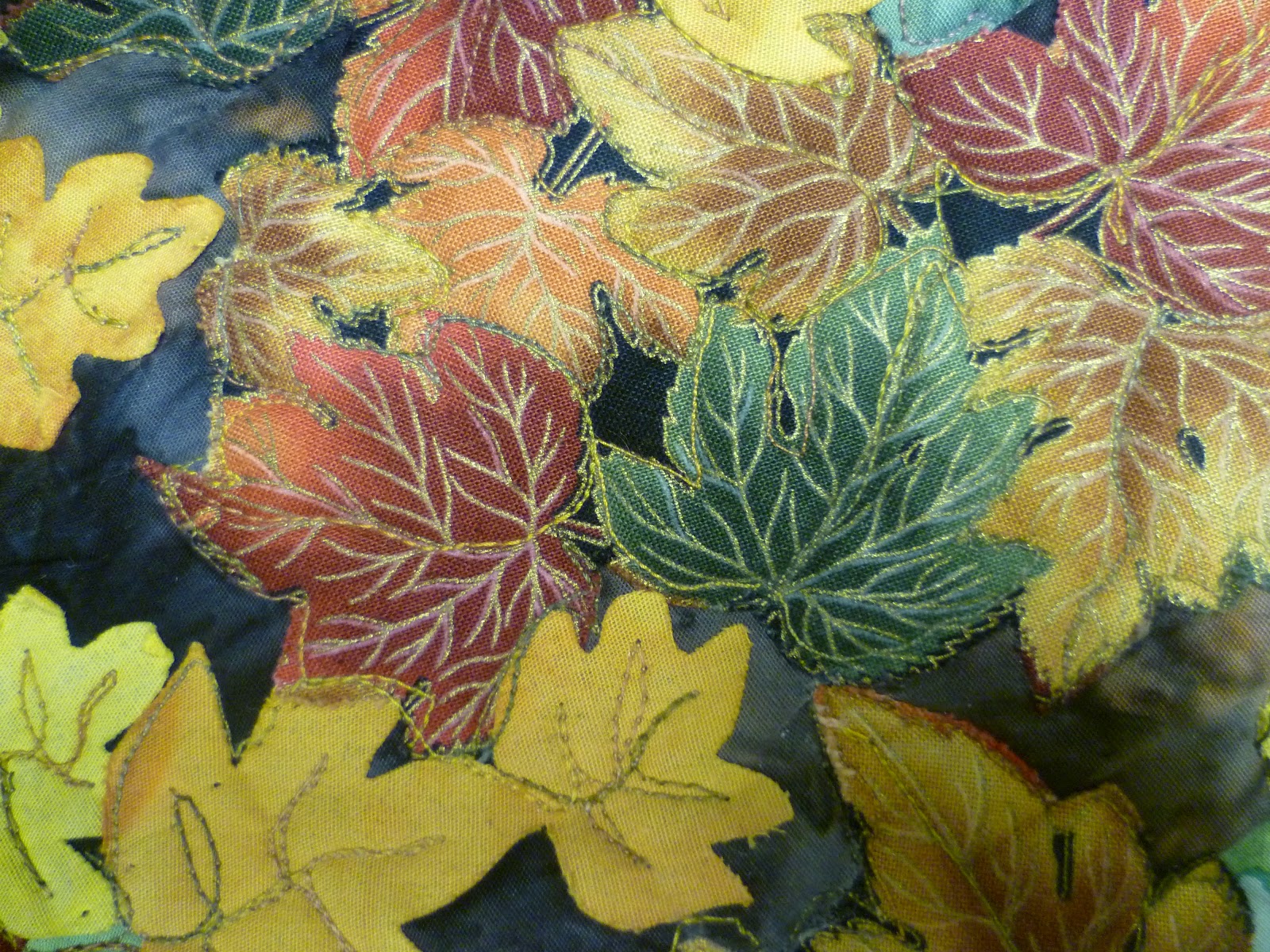 Having looked at the rules for the Hoffman Challenge, they remind me of strict English country show rules where anything other than traditional is risky and diversion leads to disqualification of your rhubarb jam, Victoria sponge or whatever.  If your jam is in the wrong shaped pot, it's out - regardless of how good it is.  You imagine fierce rivalries and that having local knowledge and an inkling of the judge's preferences would be a distinct advantage! 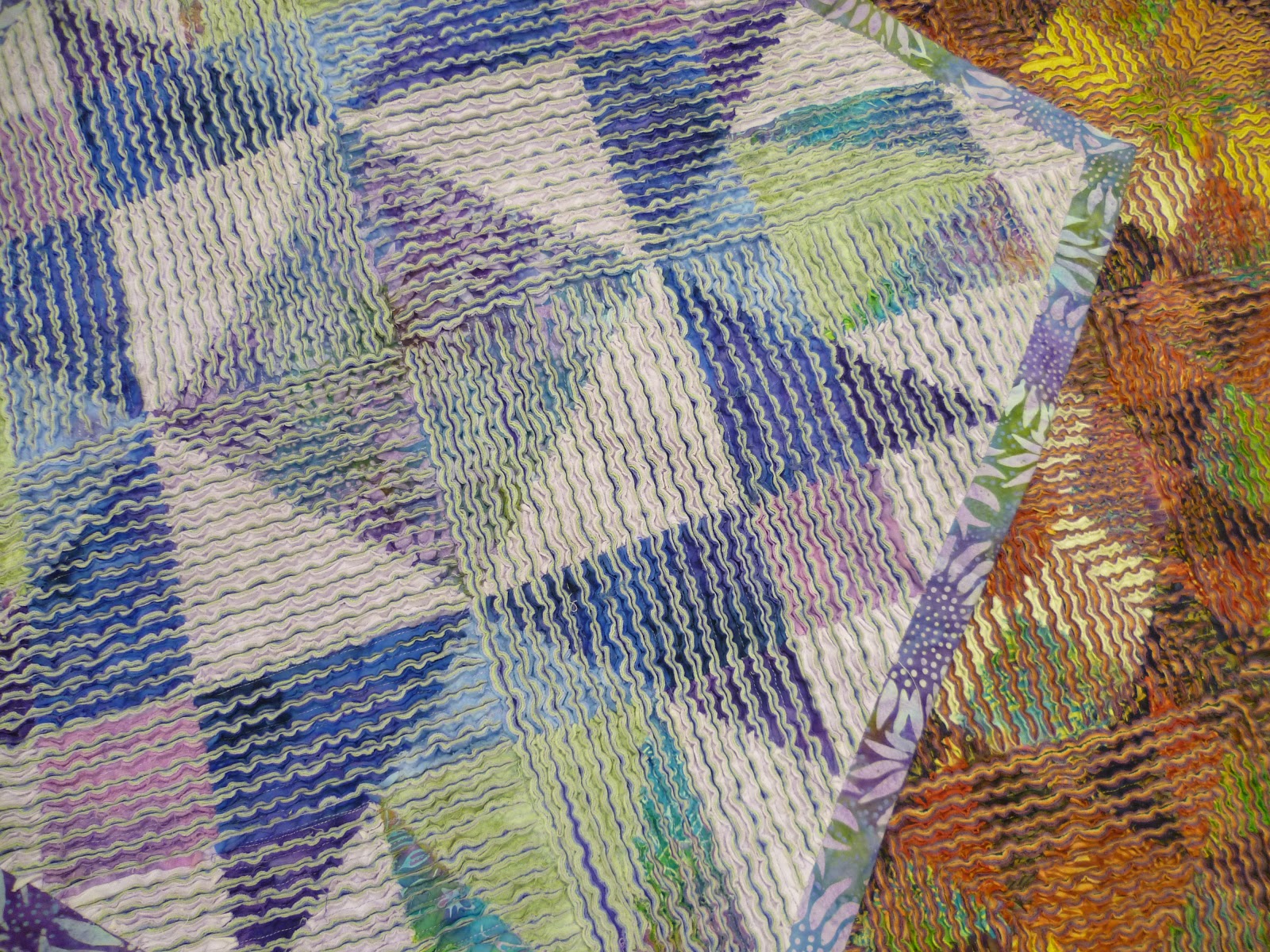 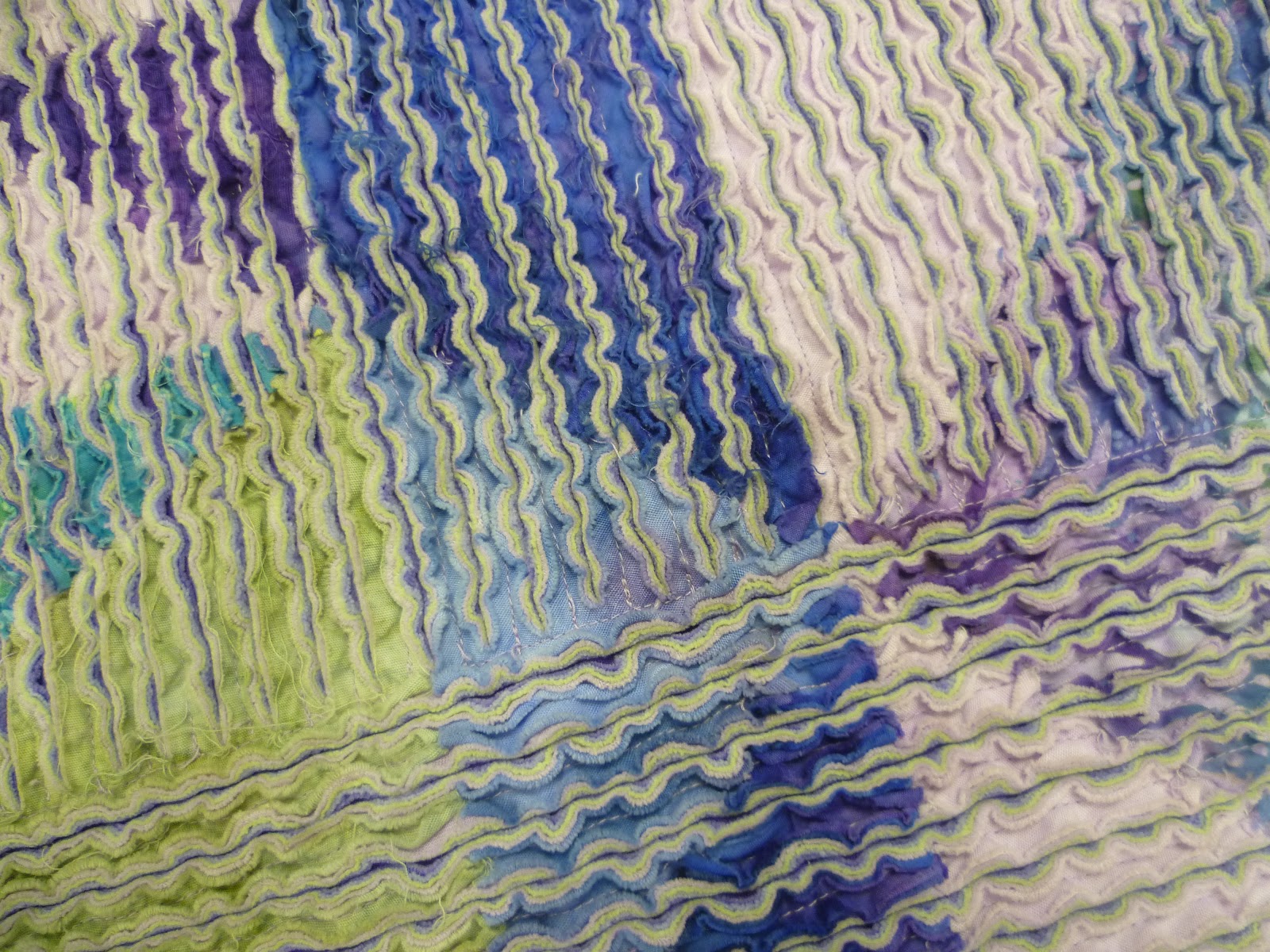 The following day we returned for a workshop to make a small hanging based on Claire's  'These are a few of my favourite flowers' quilt using bonding, layering, painting and machine quilting.
﻿
﻿
This wasn't a day for experimentation or design but purely to learn a technique which would come in useful for Assignment 3 (Stage 3 - Applied Fabric Techniques). 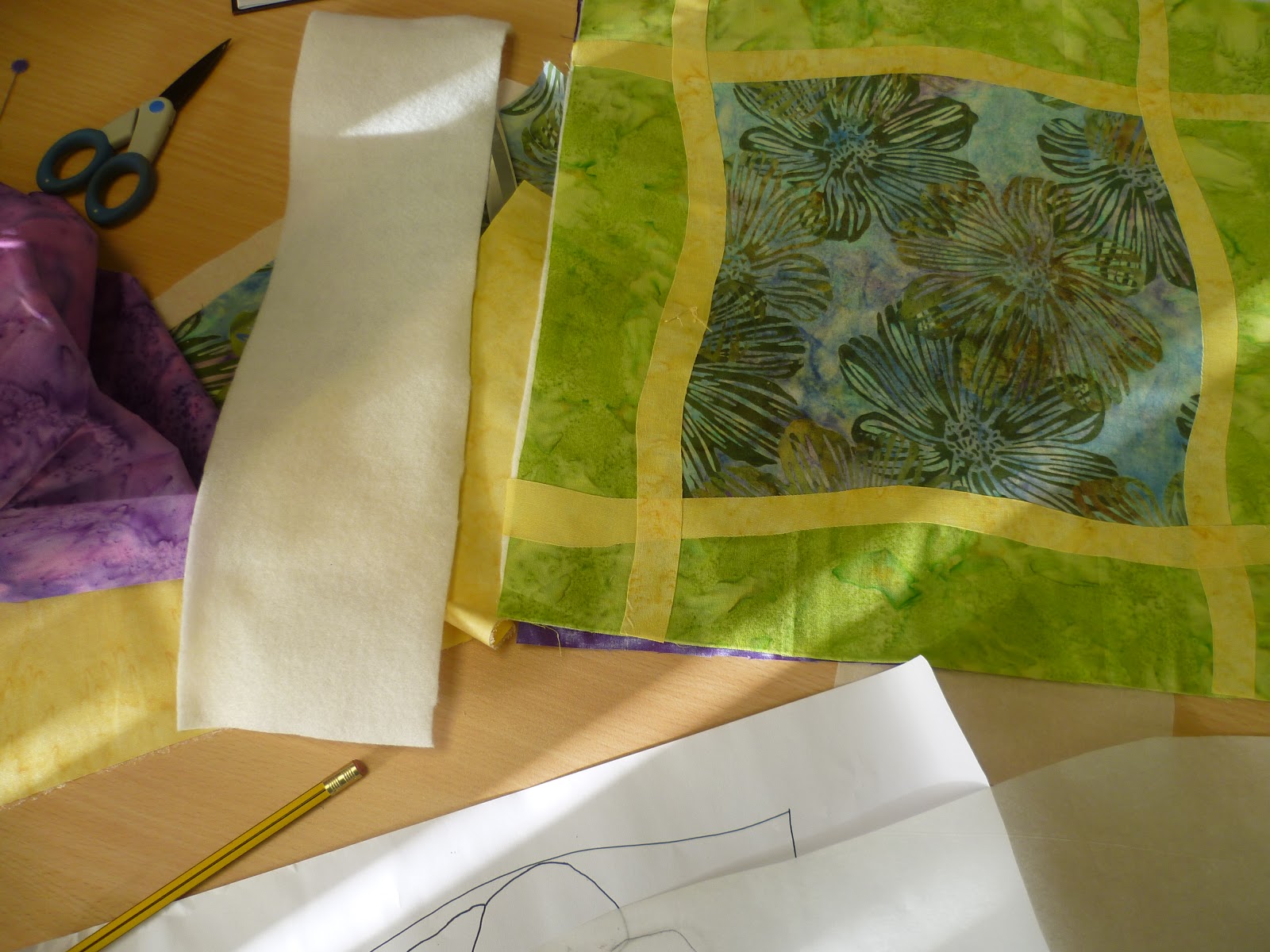 I chose the pansy element and began by selecting my fabrics, then cutting and sandwiching Armo fleece wadding between the backing and base fabric. (505 Semi-Fixative Spray was ideal for holding the layers in place.)  Next I ironed the yellow inner frame and patterned batik foliage fabric onto Bondaweb.  I peeled off the backing and used this to trace the pattern with a pencil (white or silver pencil shows up better on the darker fabrics).  The bonding paper was ironed back on to the glue side to transfer the pattern which was then cut out and ironed onto the front of the background. 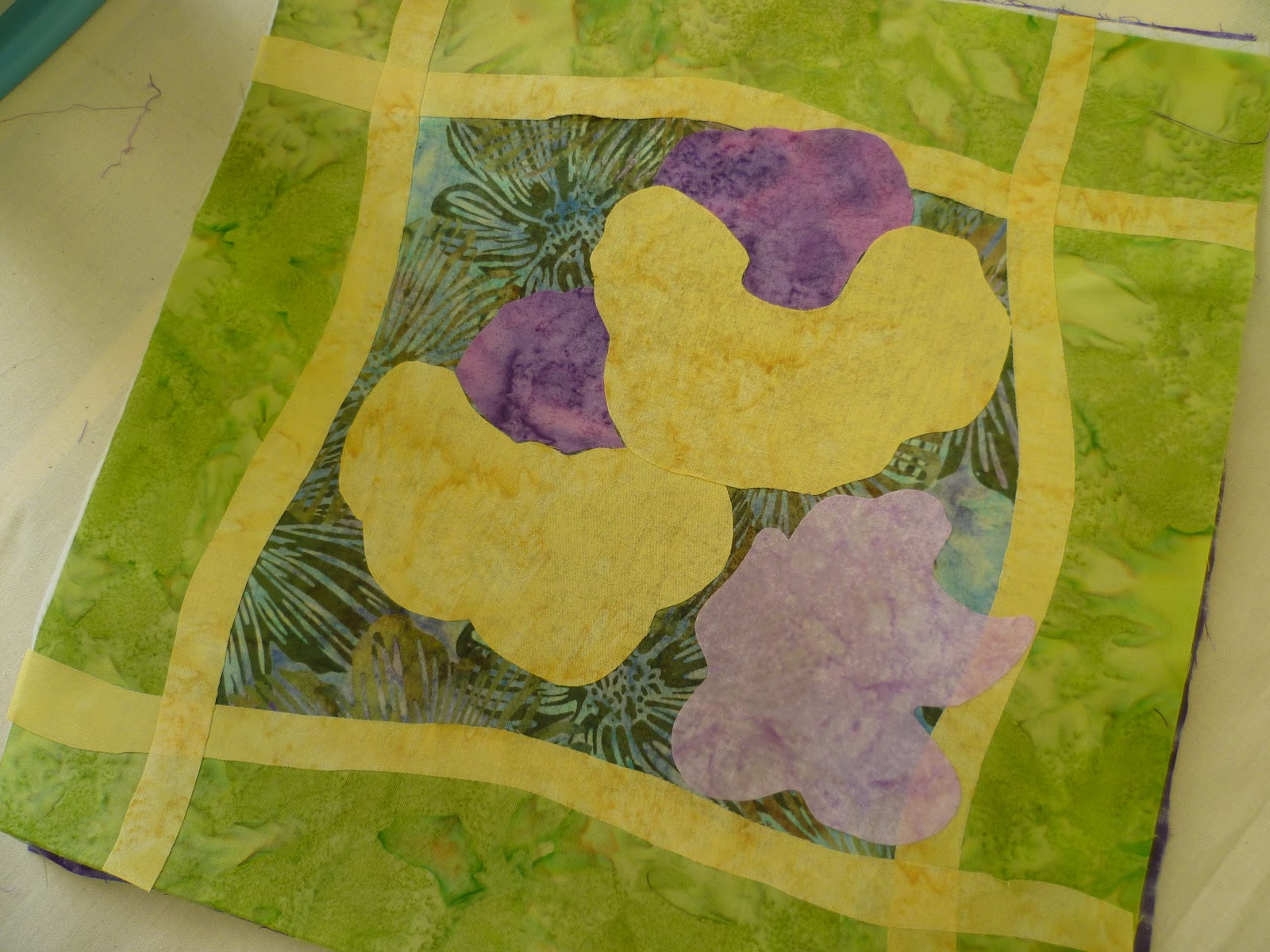 ﻿
﻿
﻿All the other shapes were copied, cut out with small sharp scissors and bonded in the same way.  Fabric paints and pens were used to add shadow and highlights. To brighten the flower centres, a white paint mixed with acrylic ink fixer was used (Liquitex).  This had a ball bearing in to keep the thick ink flowing and was highly pigmented to cover the darker fabric effectively and allow it to be painted over. 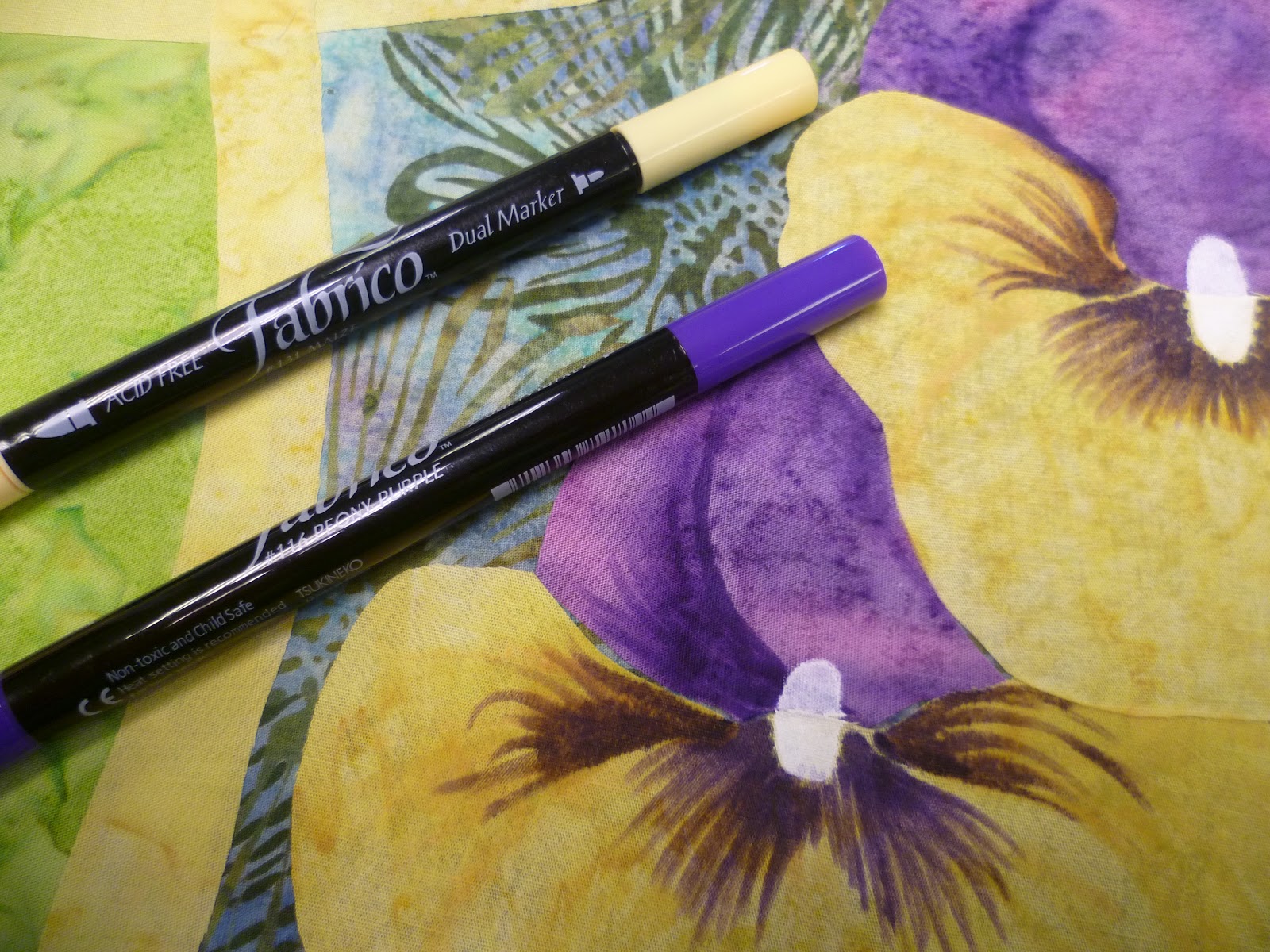 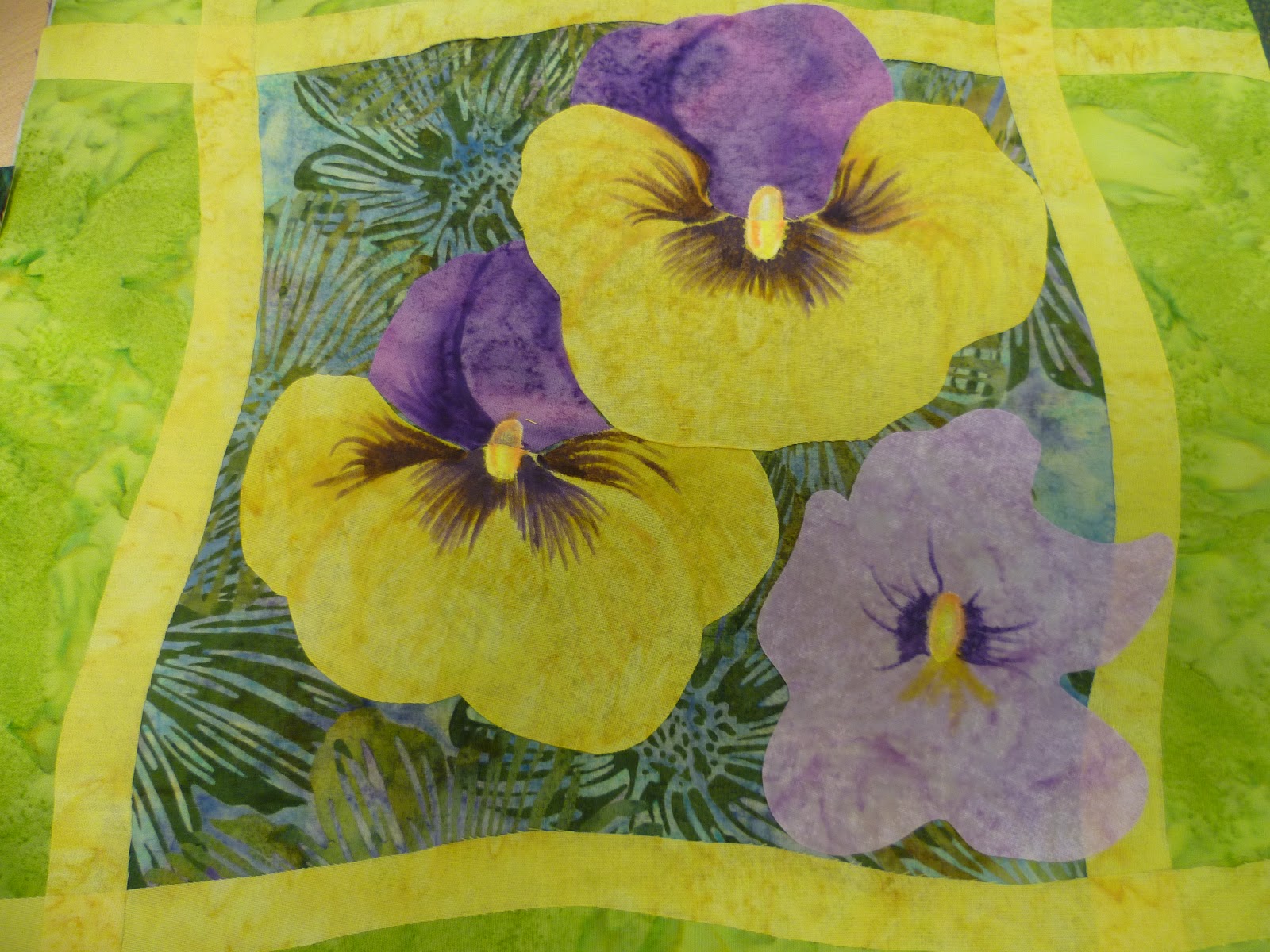 With all the pieces in place, it was ready for quilting.  The shapes were enhanced using the  darning foot for free machining. Finally to finish the raw edges, I consulted a book on cushions.  I cut bias strips about 5cm wide and joined them together so I had a piece as long as the diameter.  I folded and pressed the long sides into the centre then opened out the fold.  The bias strip was placed on the quilt right sides and raw edges together and stitched along the fold line. I stopped and started stitching about 2.5cm from each corner so I could fold over the binding strip and manipulate the fabric into a neat (well it's supposed ton be neat) mitred corner.  On the back I folded under the raw edge and slip stitched in place by hand. 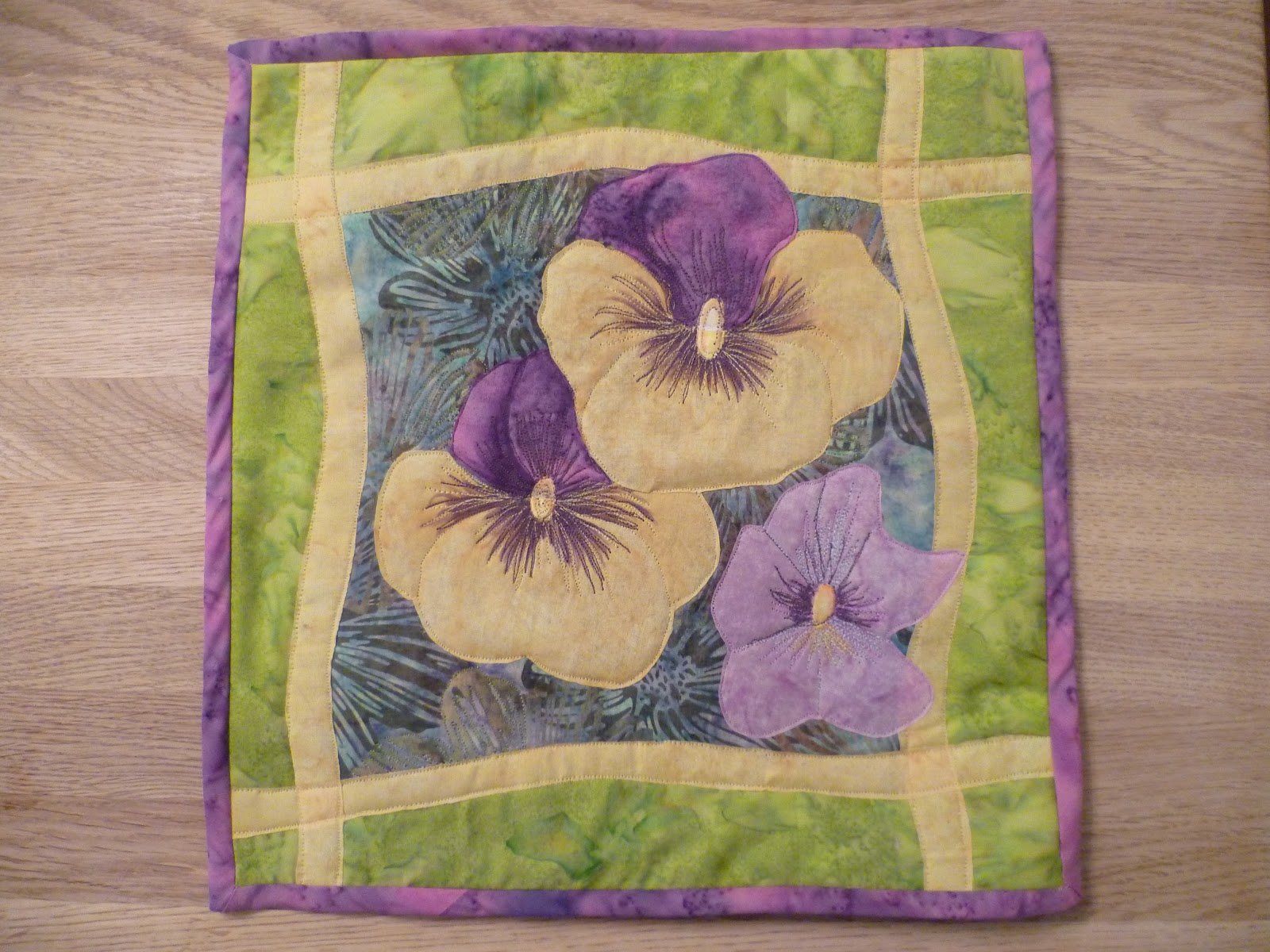 ﻿
Following someone else's instructions so closely felt rather stifling, but now I've learnt some techniques, I'm looking forward to using my left over Bondaweb during Assignment 3.  I'll be having a go making samples of some of my own designs using a variety of fabrics in Stage 3 and giving chenille a try in Stage 4.
Posted by LizzyB at 08:09

Email ThisBlogThis!Share to TwitterShare to FacebookShare to Pinterest
Labels: Bonding and Quilting, Workshops