Back in Assignment 2, 'Experiments with Printing and Painting' there is an optional section on silk painting.  I'd seen that my local adult education centre was offering a 4 week textile class that included silk painting so I decided to wait and try it there rather than buy all the expensive materials.  Other techniques we were going to learn were feltmaking and batik.

We began with batik which is essentially drawing with liquid wax.  The wax hardens to create a resist before colour is added.  After looking at photographs, handling some stunning pieces of batik textile and pinning our cotton fabric tightly to a frame, we had a quick demo and a practise on paper.  I discovered that the controlling the flow of hot wax was a tricky business, particularly with six of us all dipping at arms length in a communal pot.  Too hot and there's a constant dribble, too cold and the tjanting tool would clog.  With this and the limited time frame in mind, I looked through images for a simple source of inspiration where the unintentional blobs could be part of the design.  Silver birch trees with a lovely wintry light seemed appropriate, especially as temperatures outside were freezing. 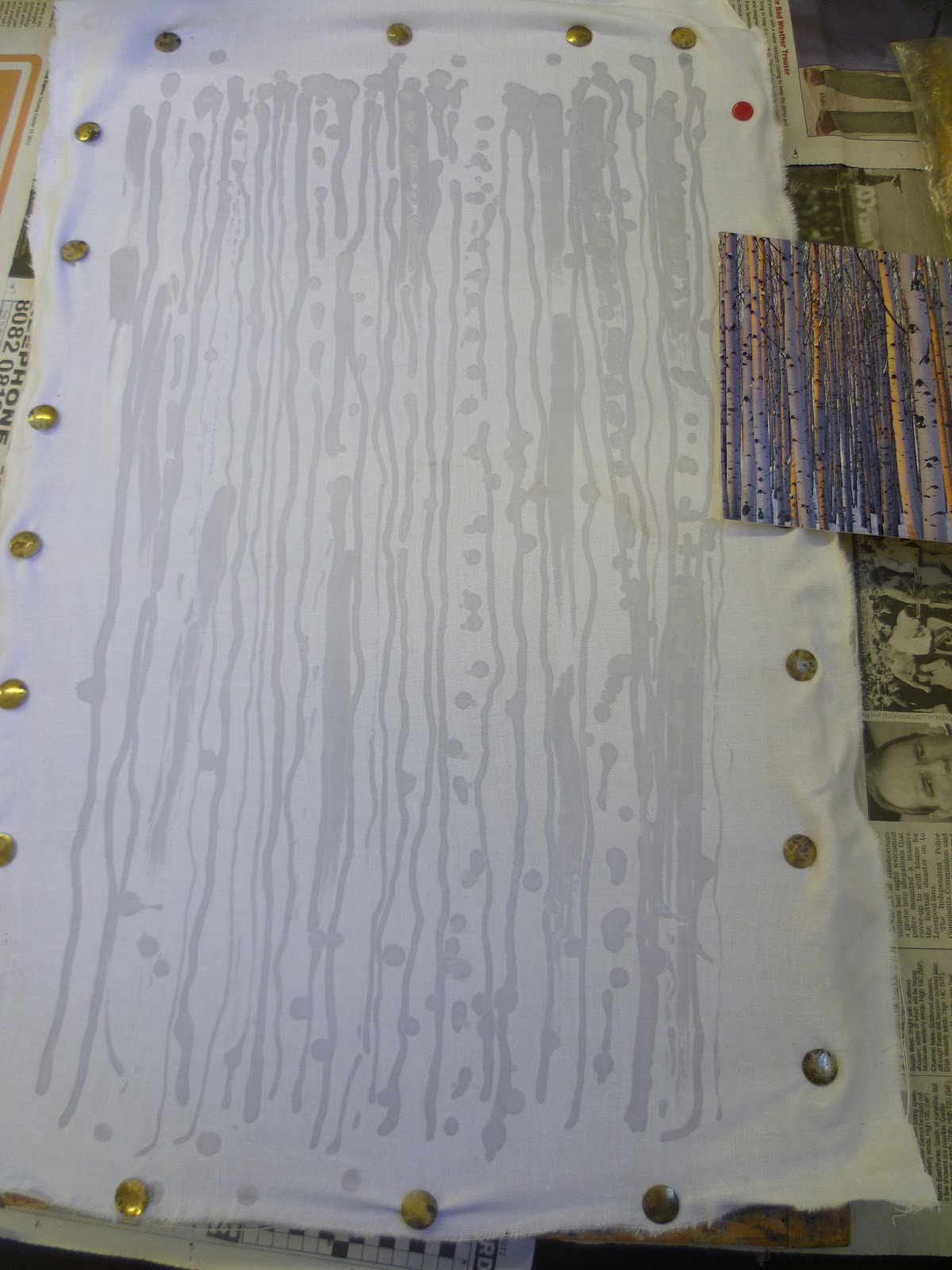 Conscious of timescales, I was working in rough lines quickly and freely, and it didn't take long for the wax to harden on the fabric when I put it outside in the cold temperatures.  Even so, it could have done with a bit longer.  When I scrunched the wax, attempting to create the cracked texture of the bark, it wasn't quite brittle enough in the thicker areas.  Next I painted on the coloured dye which needed to be worked in really well with the brush to get into the cracks. Once the piece was completely dry, it came off the frame and was ironed between sheets of blank newspaper to remove the wax (protect iron with extra sheets of newspaper).  Every time I thought all the wax was out, because there didn't seem to be anything more coming onto the paper and the fabric felt soft, it would cool down and stiffen again.  The tutor said running under warm water might get the wax out completely, though there was a risk of some colour coming out if wasn't fully fixed. Some colour did wash out so the end result was less vibrant.  I wouldn't use warm water again but I've still got a good background for embellishing. 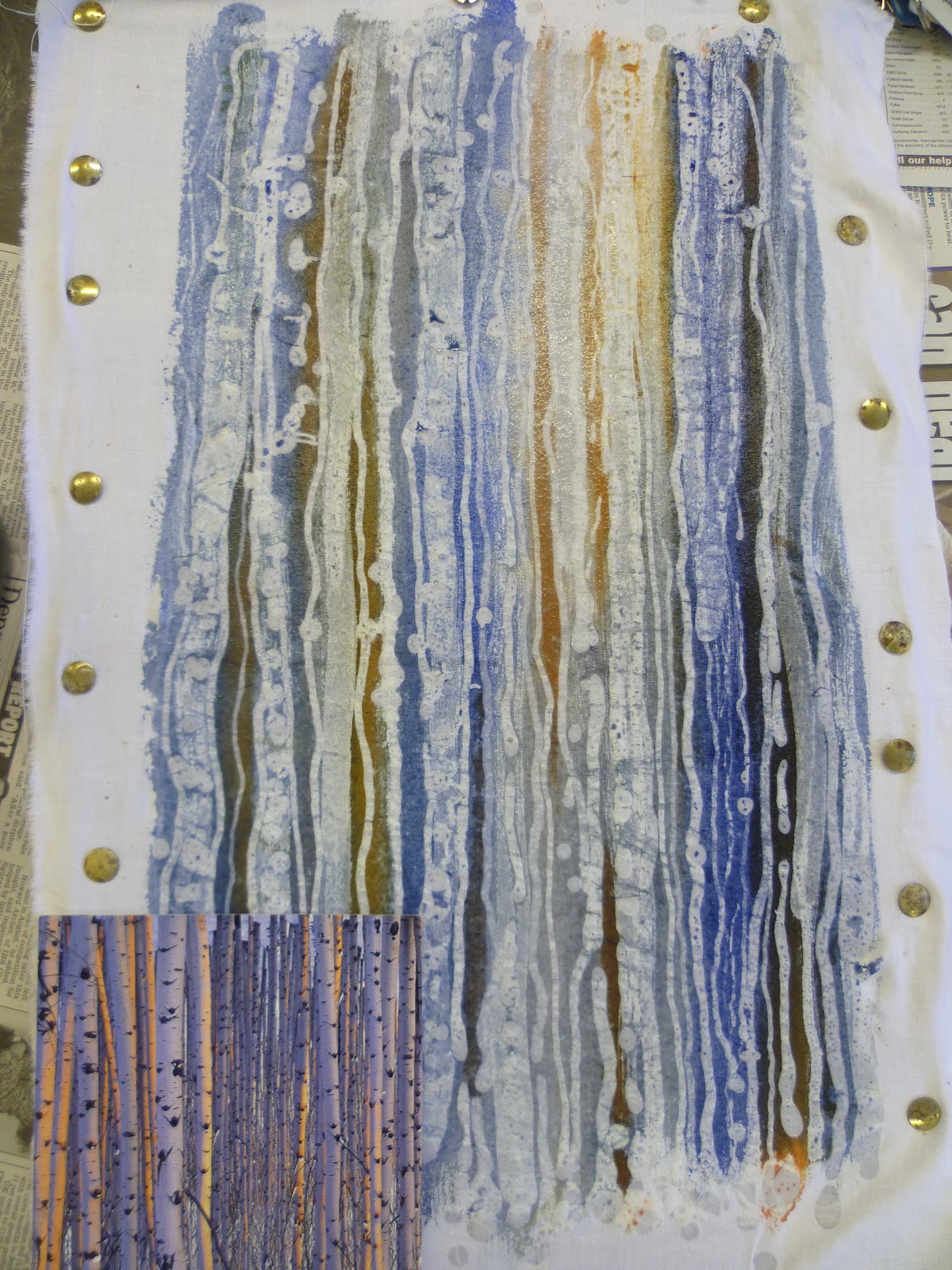 On the second session, the batik wax was out again and we could begin a piece that would be dip dyed in three different colours.  I'd brought an image of a glass paperweight I particularly liked from my inspiration file and hoped I could achieve something of the colour blends and transparency. I needed to think back to Assignment 1 and colour theory to work out which areas to wax out for the first dip.  It turned out to be a large area and I soon gave up with the tjanting and tried brushing and spooning the wax on.  Next I plunged my piece into a bucket containing a tepid solution of yellow dye (Colourcraft Procion) and salt. The fabric had to be soaked for at least 30 minutes. Mine was first in and had an extra 15 minutes over the others and resulted in a noticeably deeper colour.  It looked most unpromising as I rinsed it out using the cold tap until the water ran clear.  The soggy fabric was left to dry until the following week when the wax could be ironed out ready to start again. 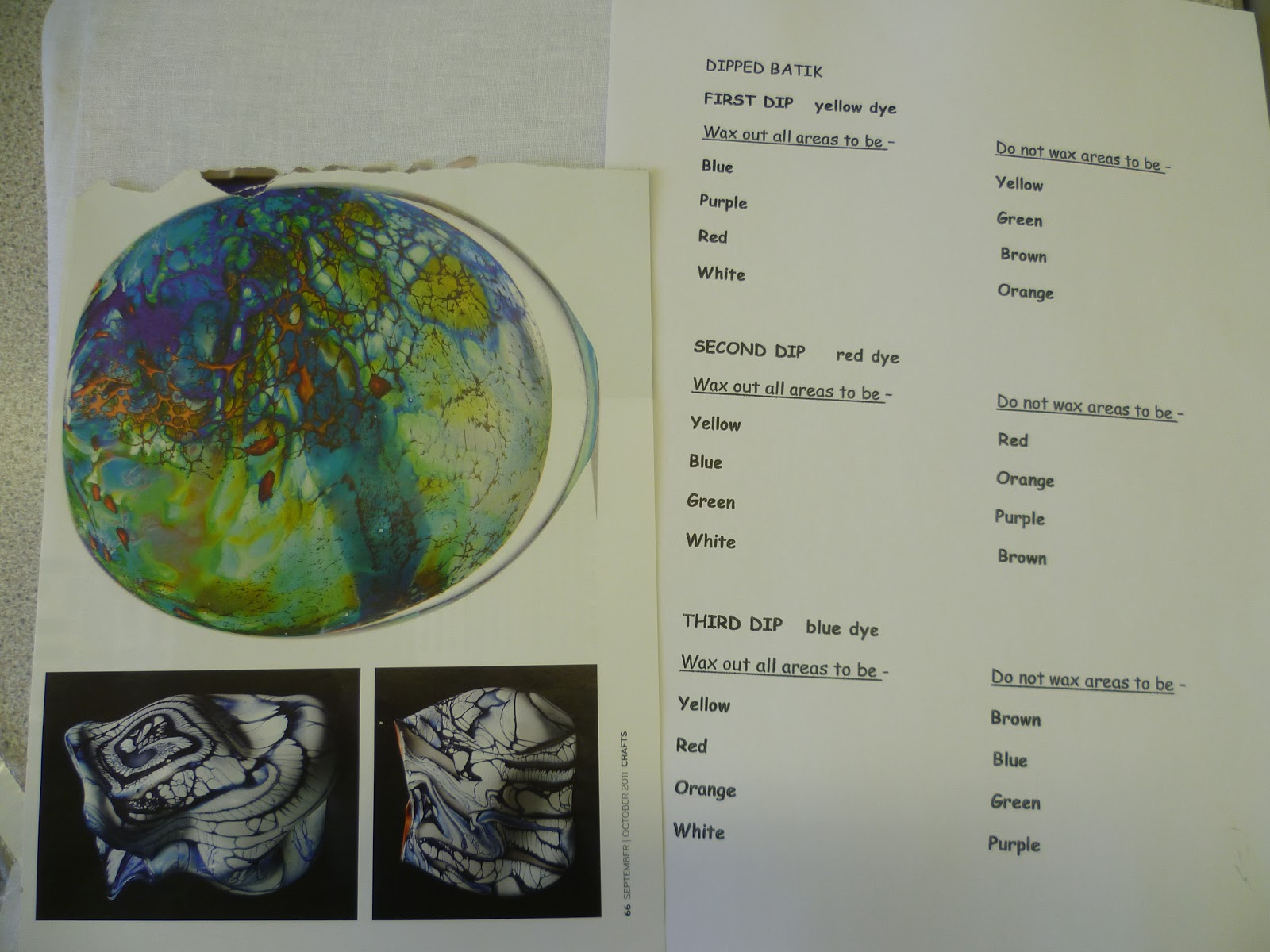 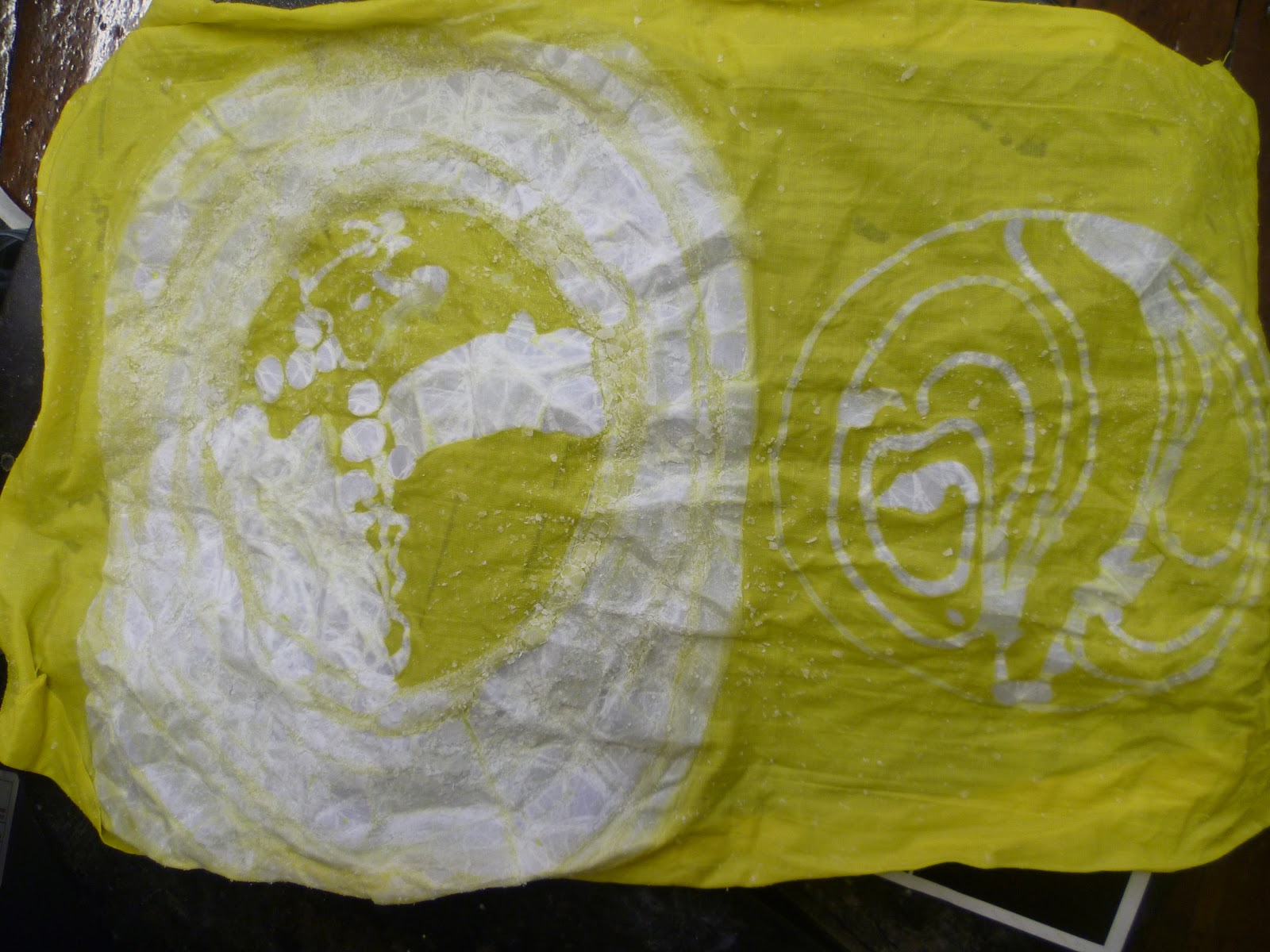 By week three, we were ready to prepare the batik for a second dip in red.  I spooned wax  onto the circular shape which was to be mainly green, blue and yellow, leaving much of the background that I'd decided would be mainly red. This time my fabric was last in the bucket and I was disappointed that the red looked wishy-washy.  However the tutor explained that the first dip is always most vibrant and when I ironed out the wax the pink shades began to look redder. 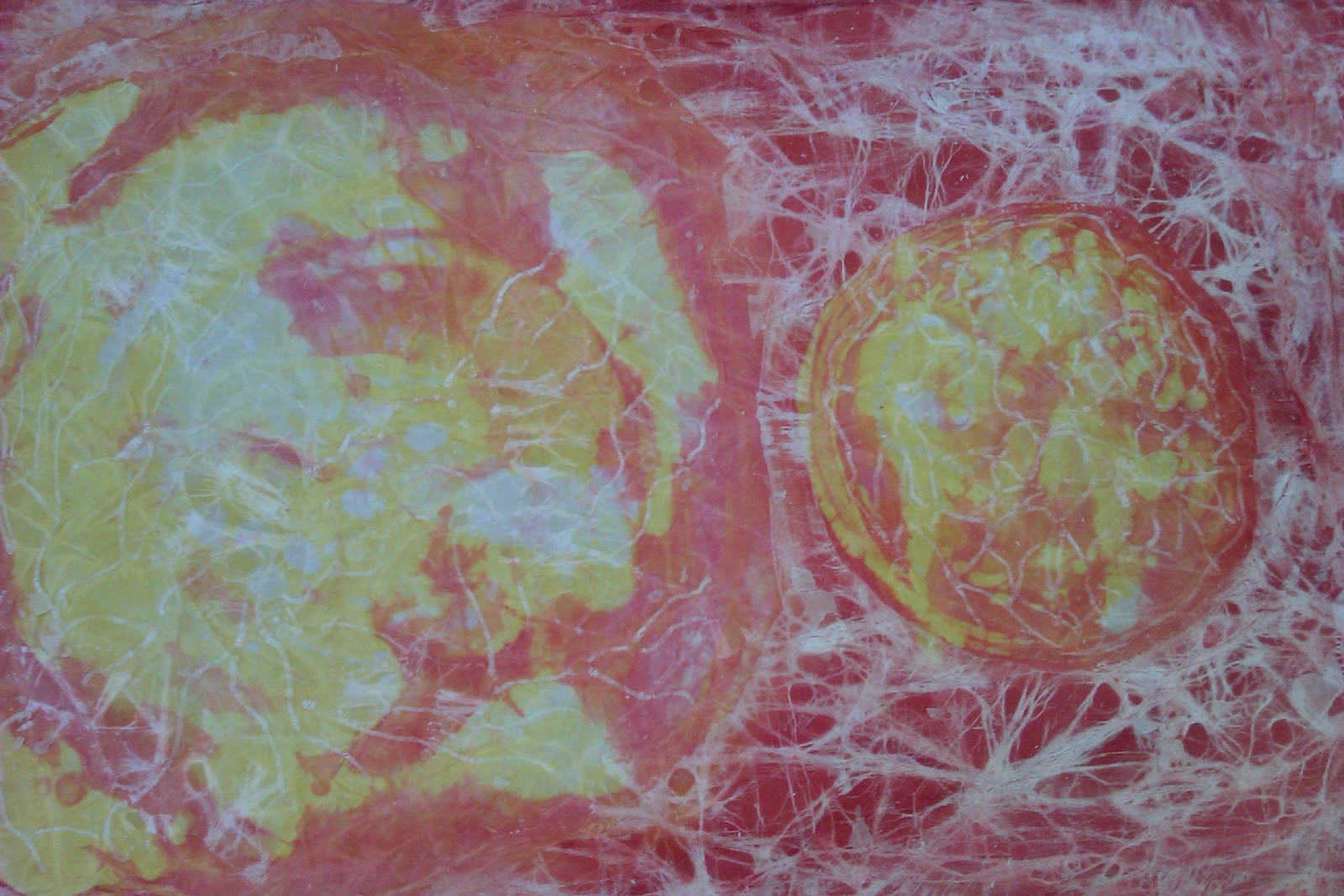 On the final week I wanted to be seeing a definite difference between the marks on the background and the paperweight shape. I used the tjanting to draw in little veins and used a spoon and brush to thickly cover the background, working quickly so the wax would have as long as possible to cool and I could give it a good scrunch before plunging it into the final blue dye.  I rinsed it and gave it a waft with the hairdryer before taking it home to dry properly.  After the previous experience I was more patient ironing out the wax and was pleased to see the colours looking bright.  I'm not sure that the result was what I was anticipating - I was expecting to see more definite marks - but I really like how the colours have blended and I definitely get the feeling of glass and transparency from the original image. 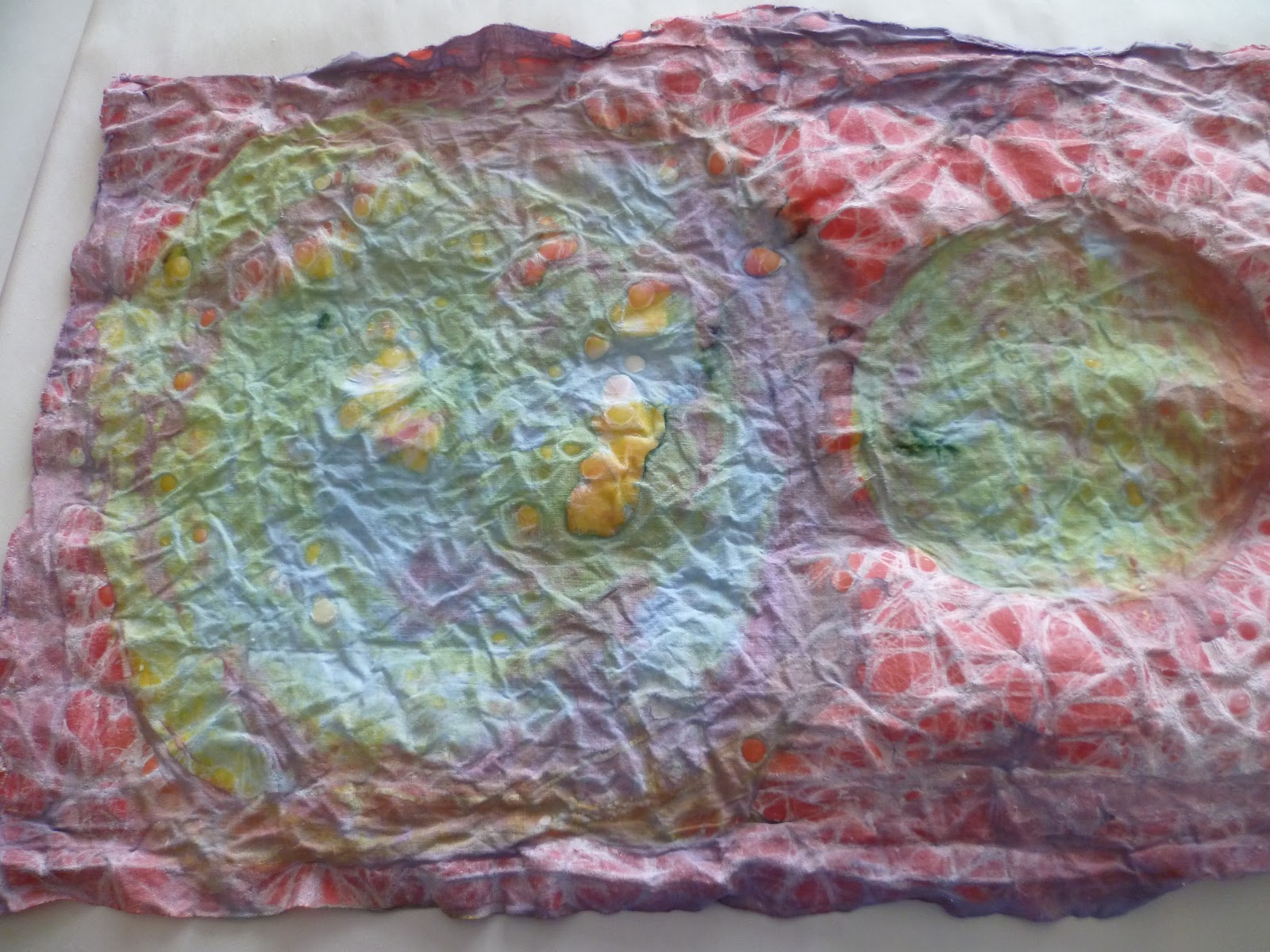 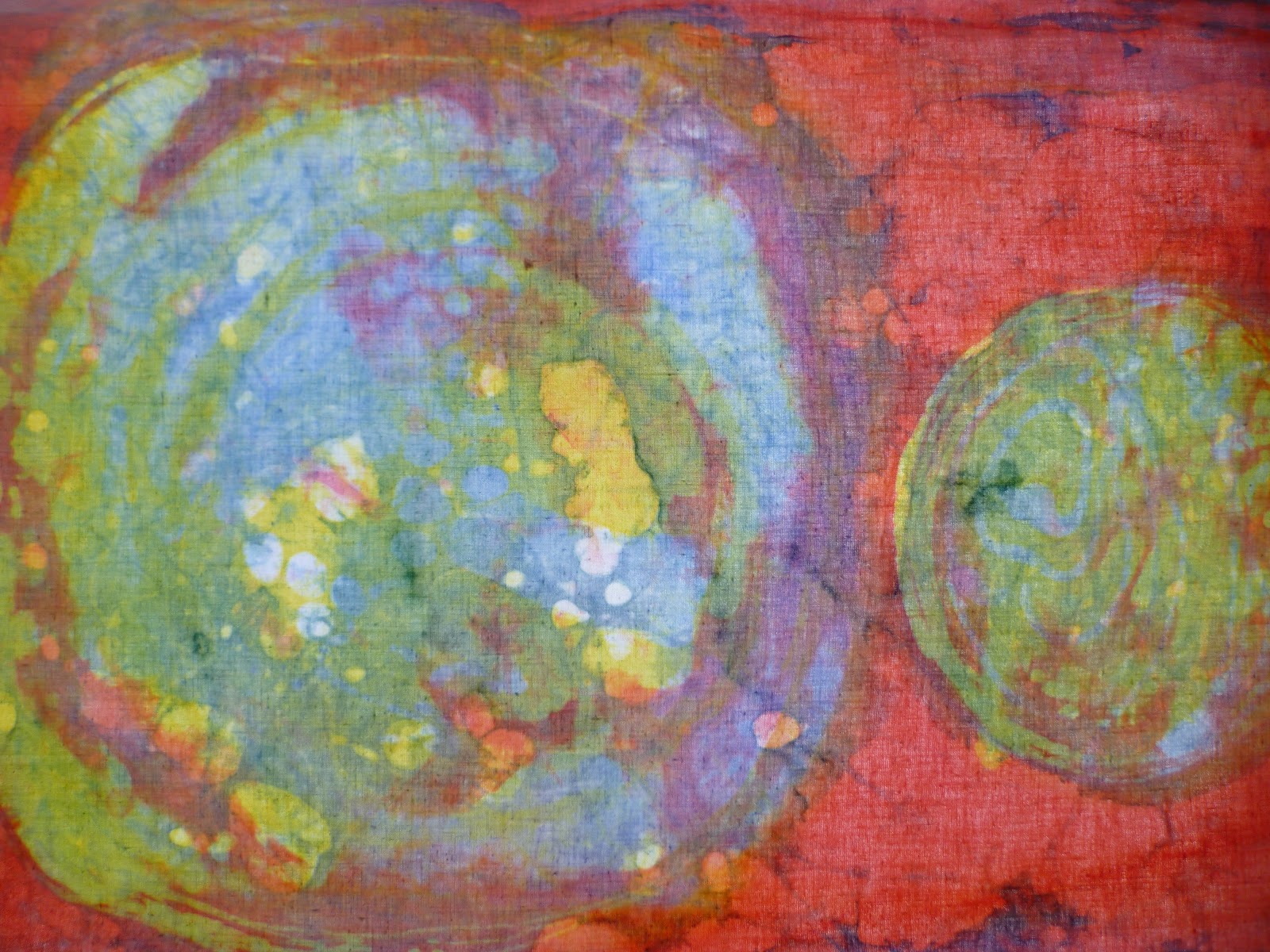 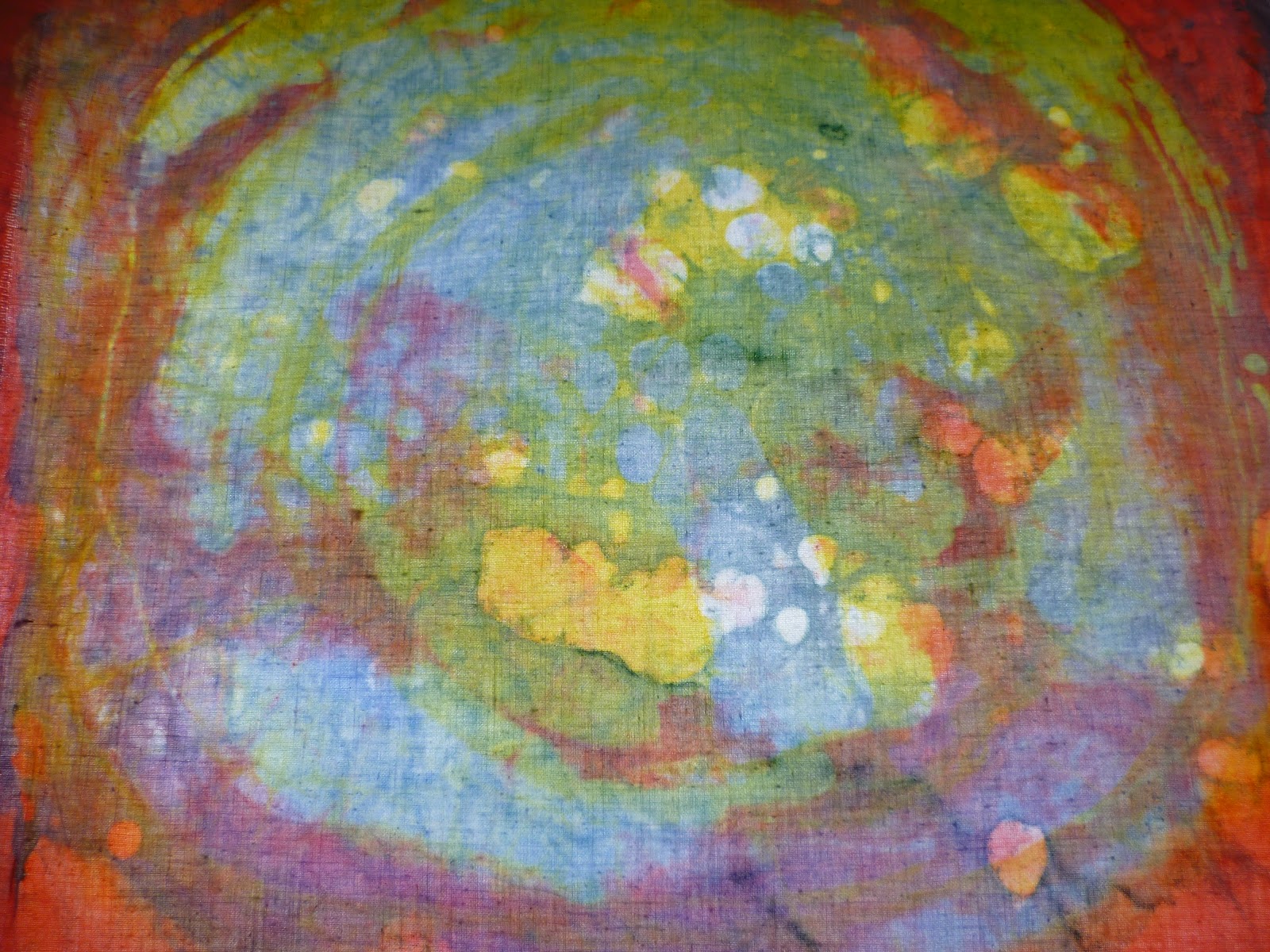 While the batik was drying and dyeing, I had time to experiment.  I waxed another piece and had a play with painting on colour again, this time trying to let the vibrant colours bleed and blend into each other. I thought in future I'd like to try combining the dip dye and painting and also try batik on patterned fabric. 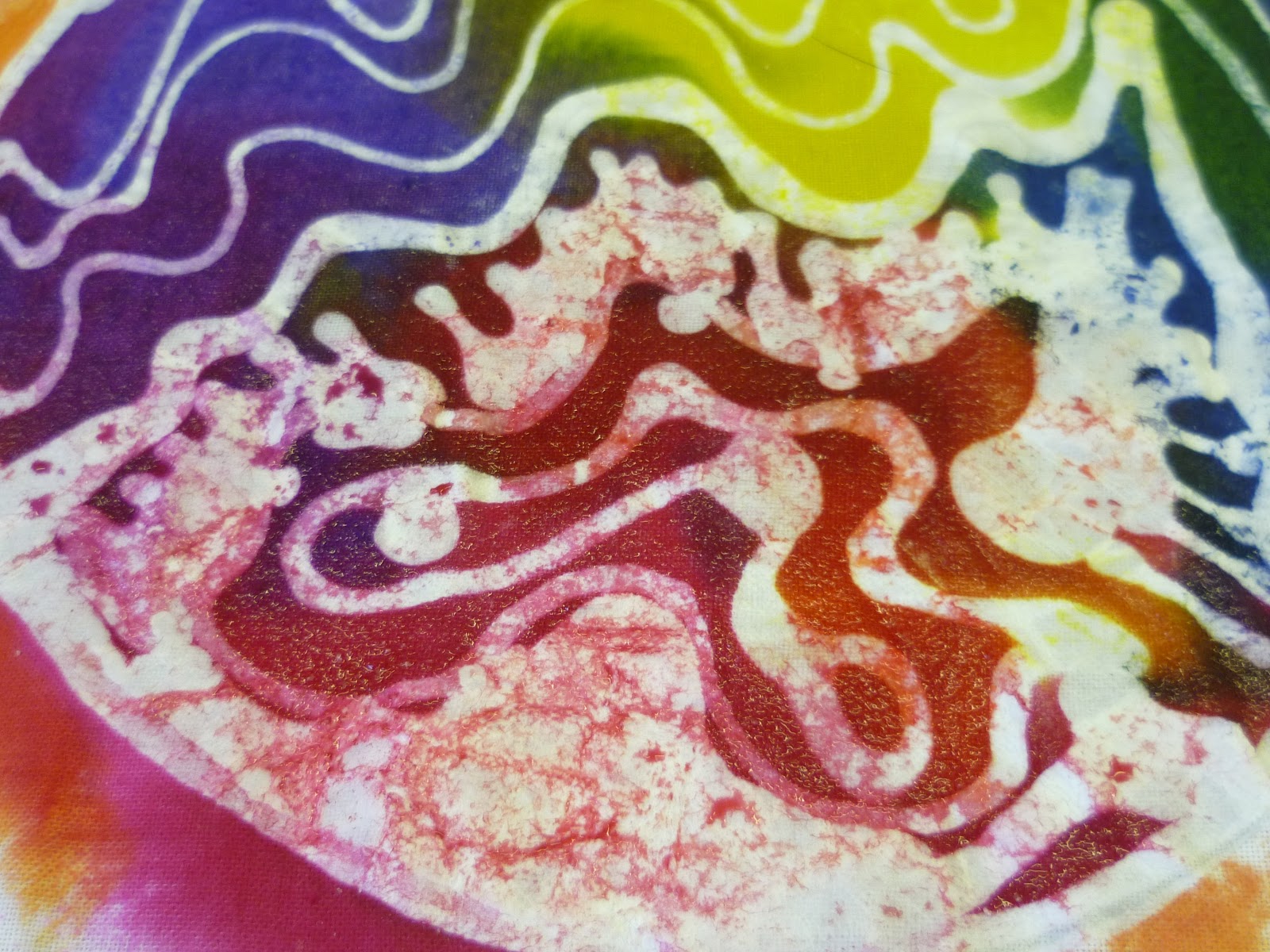 We were all given white merino wool tops to have a go at wet felting.  There were some small amounts of colour we could add.  I decided to choose seascape colours so I could add the felt to the colour theme bag that I made in Stage 4 of Assignment 2. 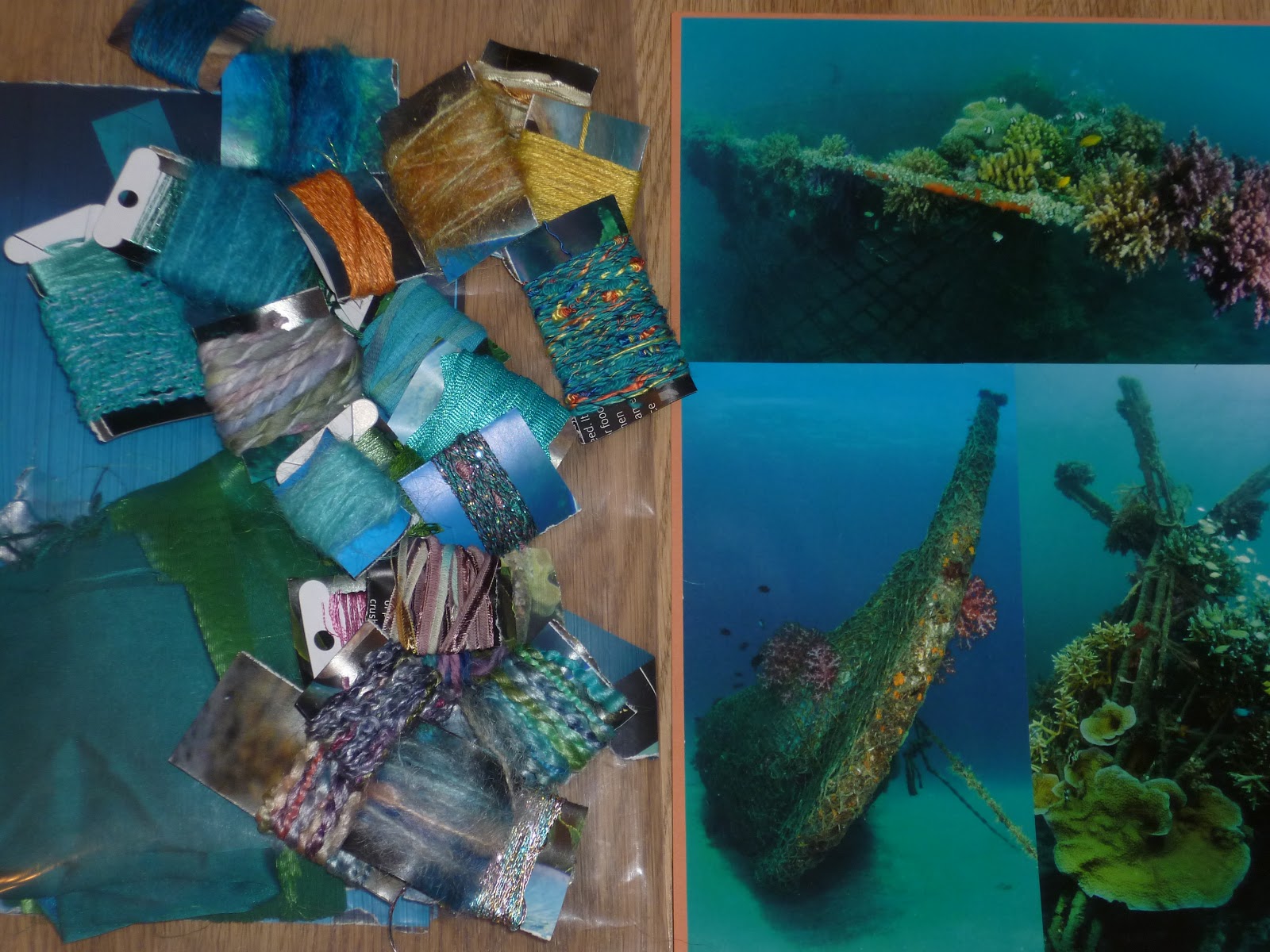 First I pulled apart the wool tops and layered them at right angles to each other inside a bubble wrap sandwich (bubbles up to increase friction).  This was placed in a shallow plastic tray (cat litter tray would do) with a piece of thin cotton fabric on top.  Washing up liquid was squeezed on followed by very hot water.  Wearing rubber gloves, I worked this well into the fabric and as the wool began to felt, I used a rolling pin and spud masher to agitate everything more roughly. Every now and again I topped up the hot water and turned the felt over. After a more than half an hour of constant mashing and bashing, the fibres no longer came away with a gentle tug, the felt was ready to squeeze out and leave to dry. 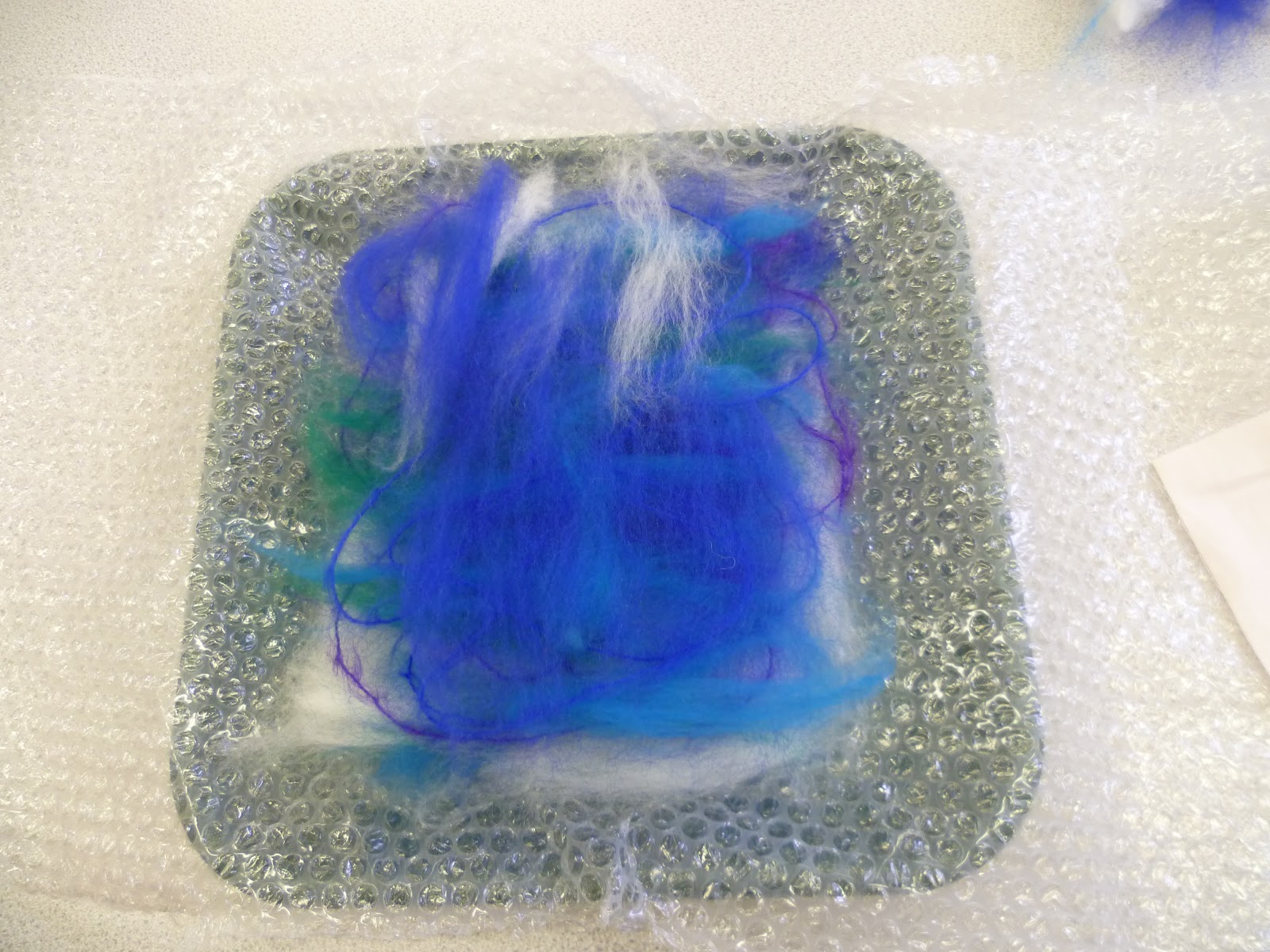 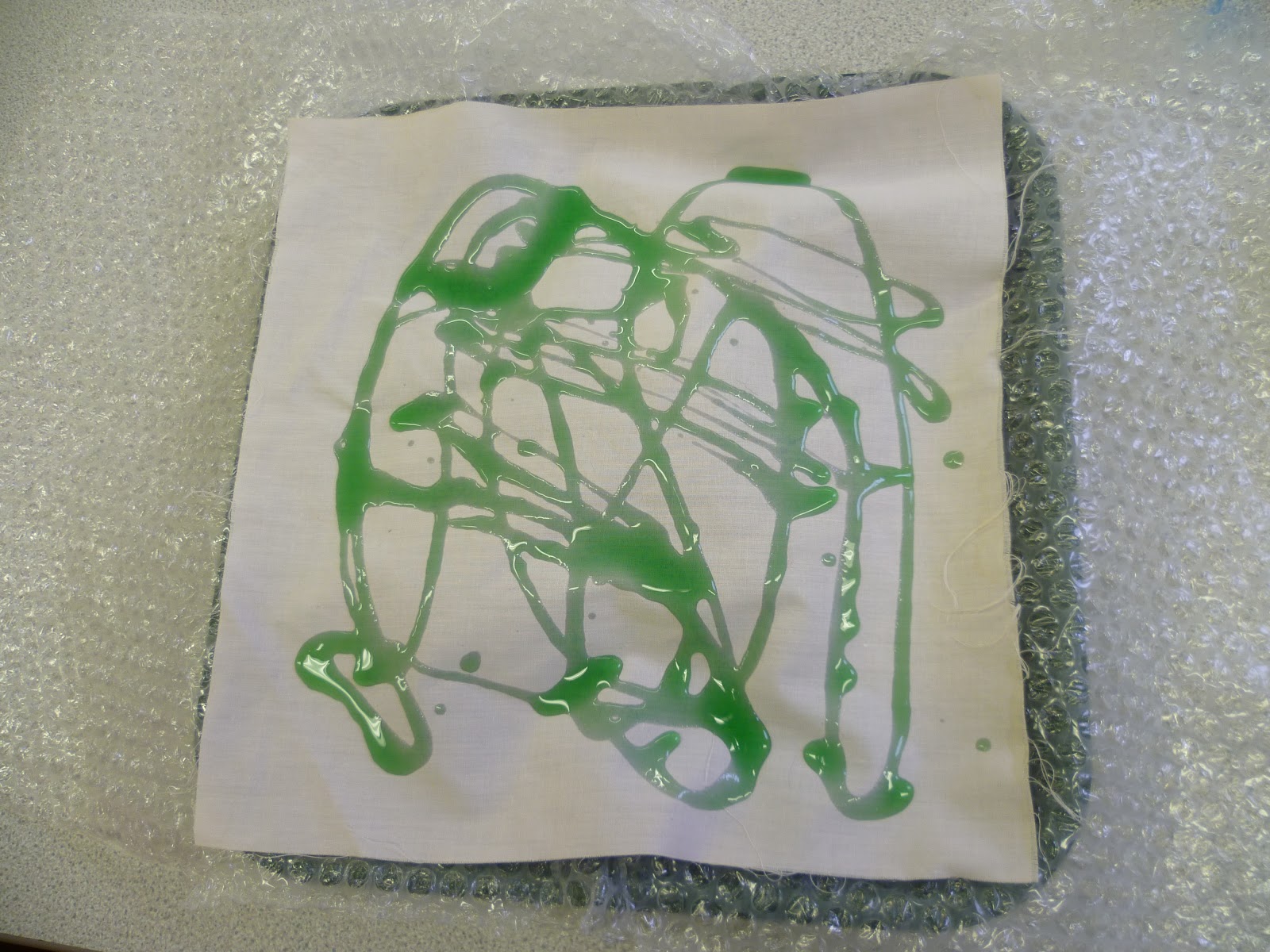 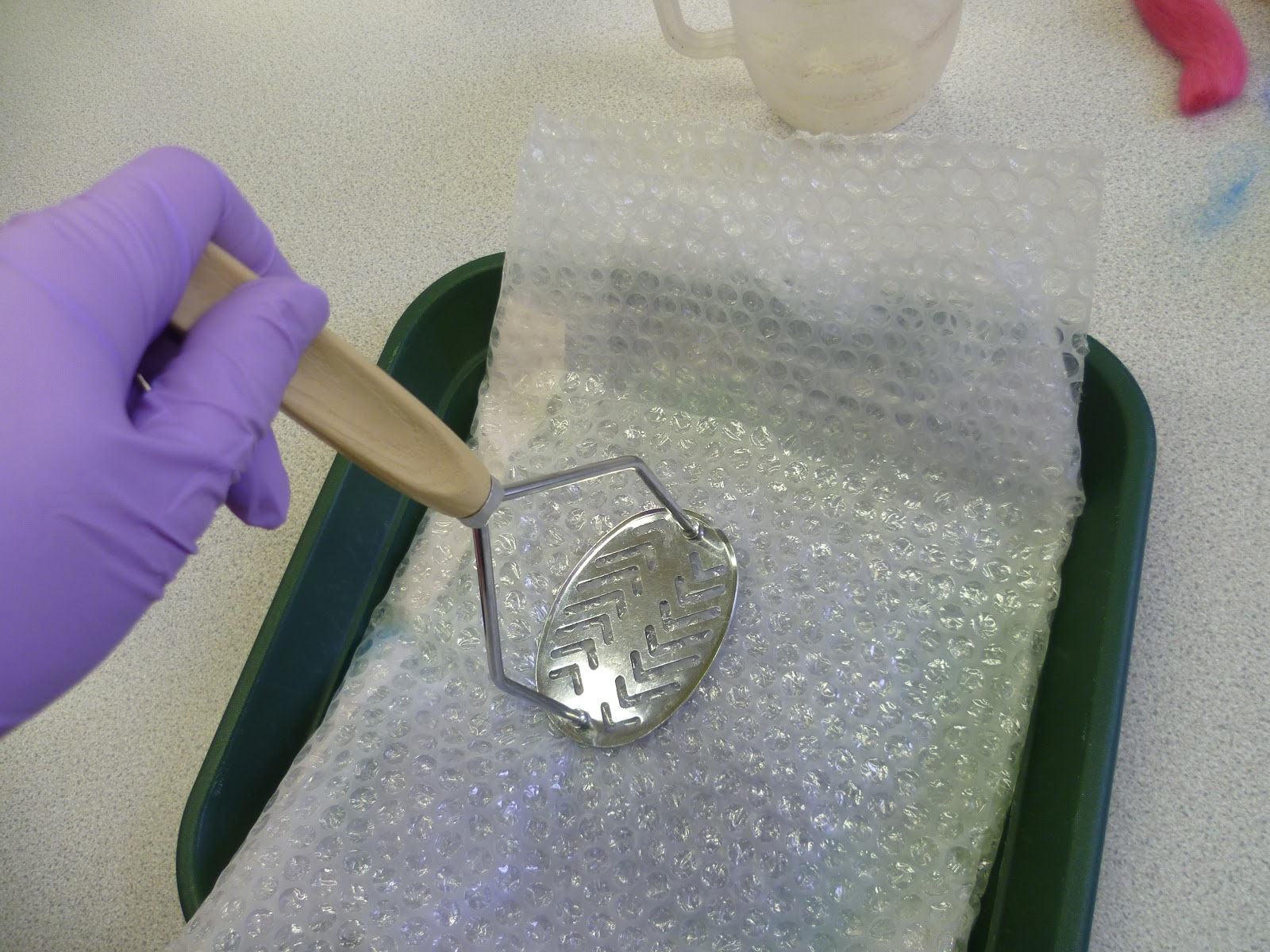 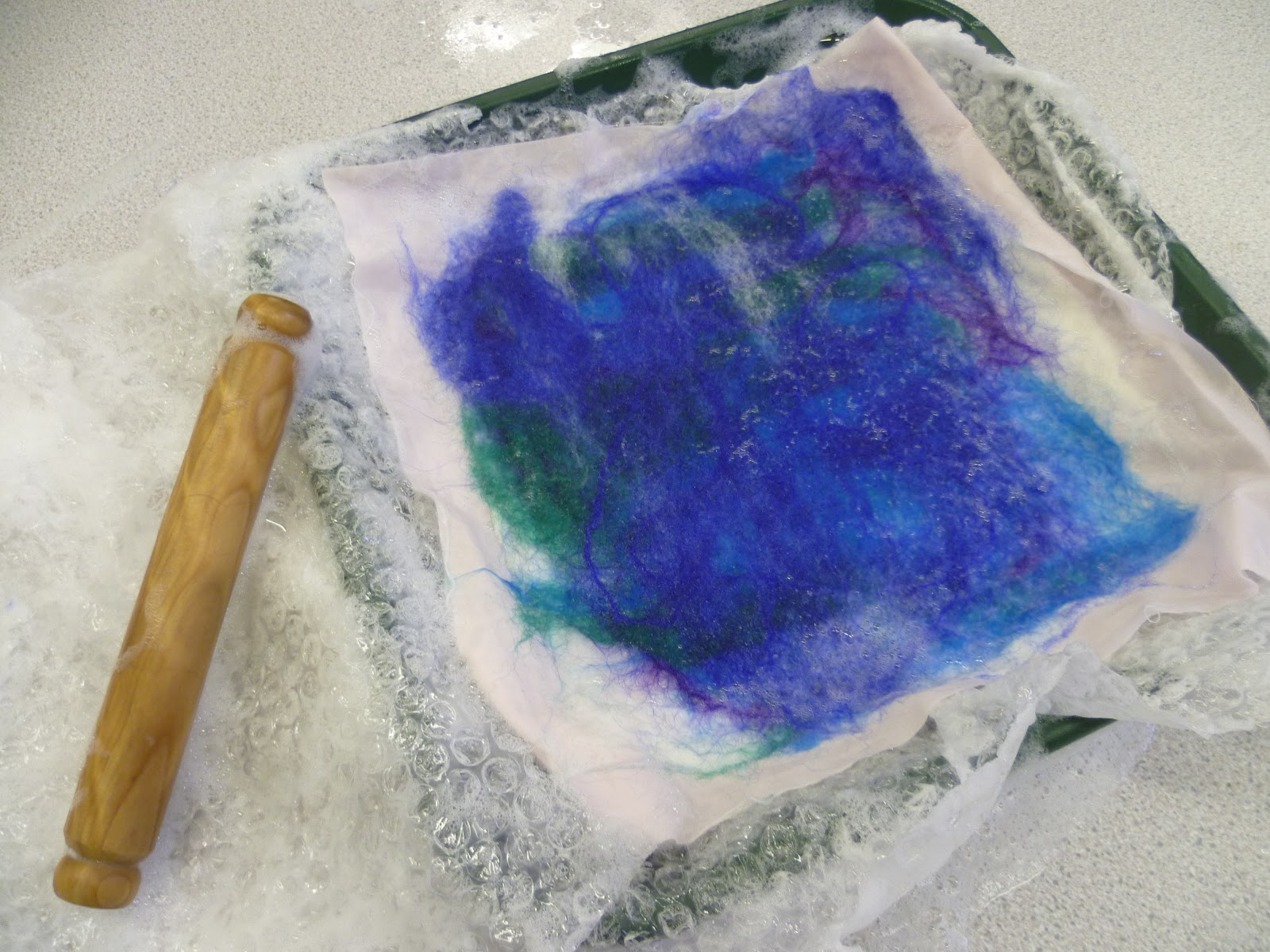 Below is the finished felt, along with another smaller piece I made from some leftovers.  When I looked at the reverse, it reminded me of the waterfall drawings I did and I think I should try to develop the drawings into felt samples. 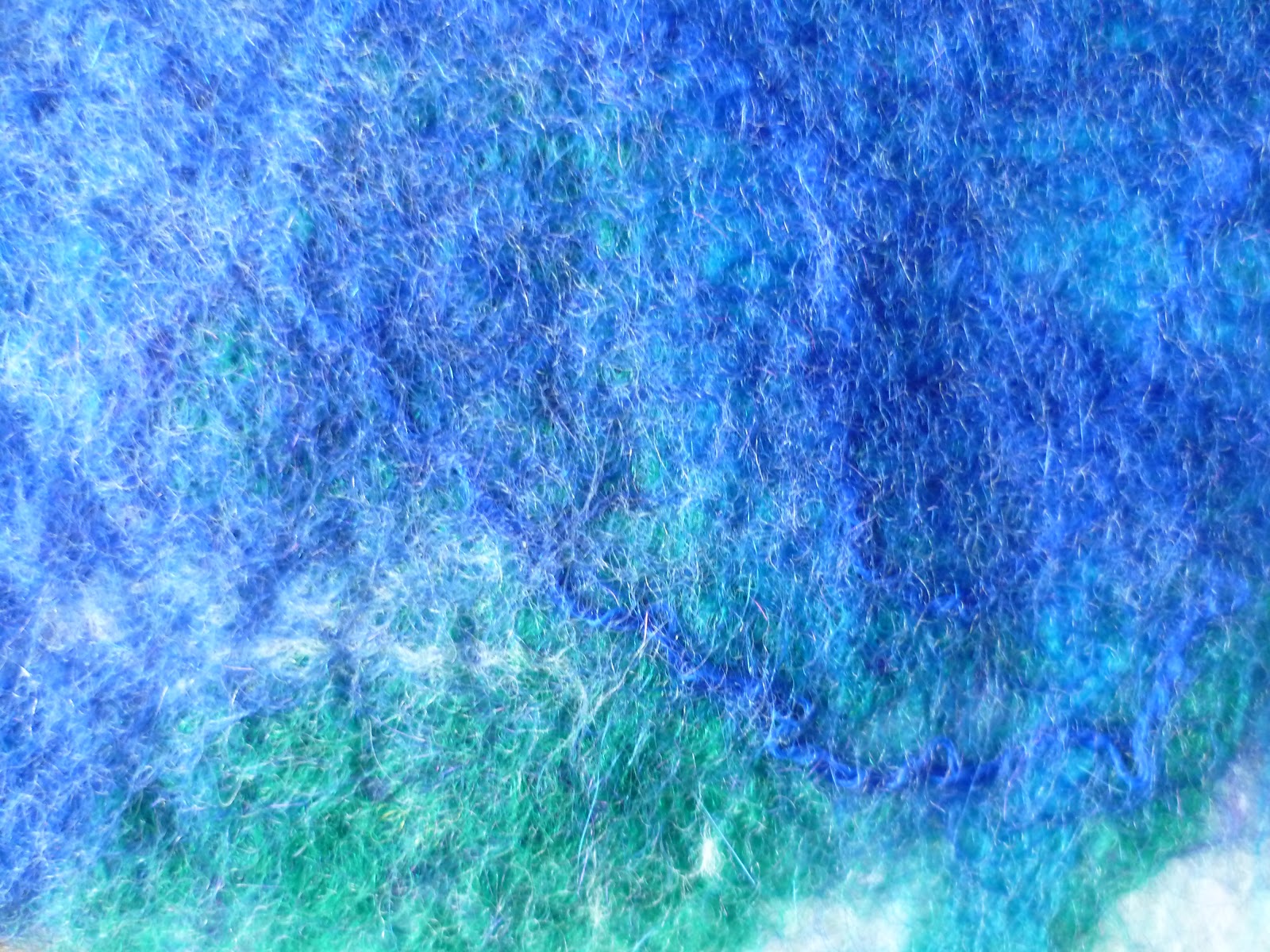 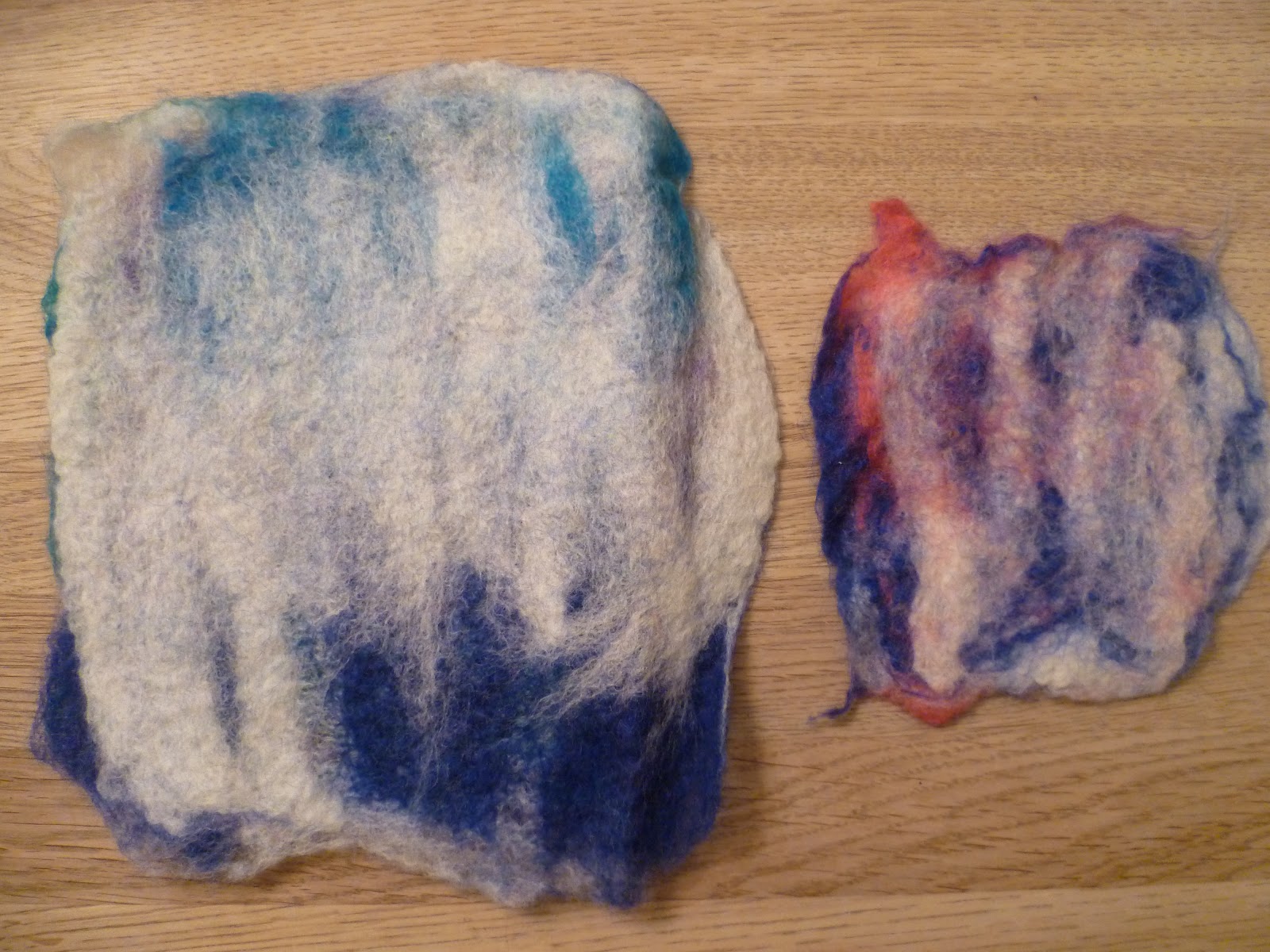 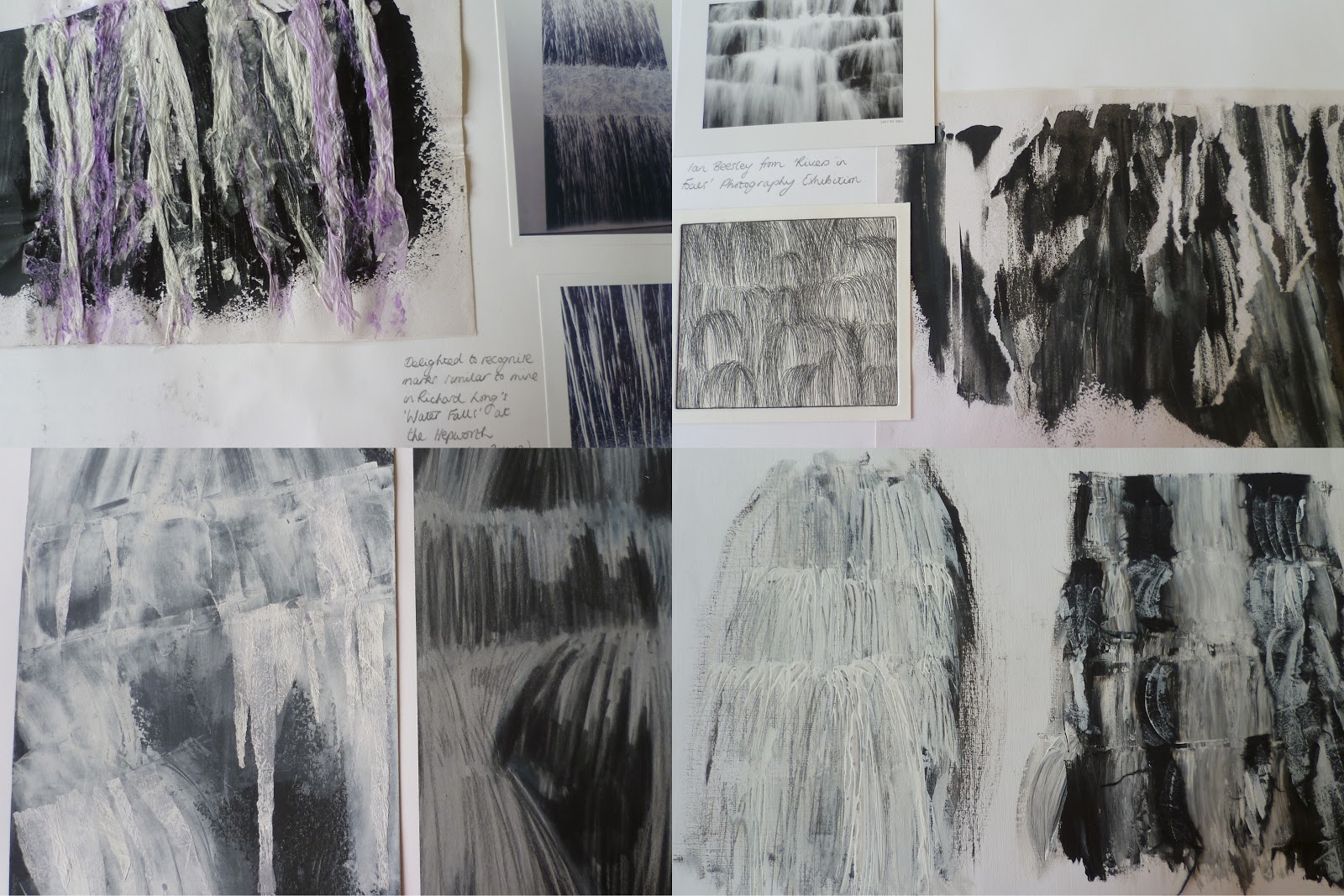 Although the felt is quite thick, because the landscape outside is bright and snowy, I found  the fibre network quite beautiful when held up against the window.  I would never have associated something so woolly with the transparency but it's similar tonally to the tissue and dye on acetate drawing I did of my polished blue stone. 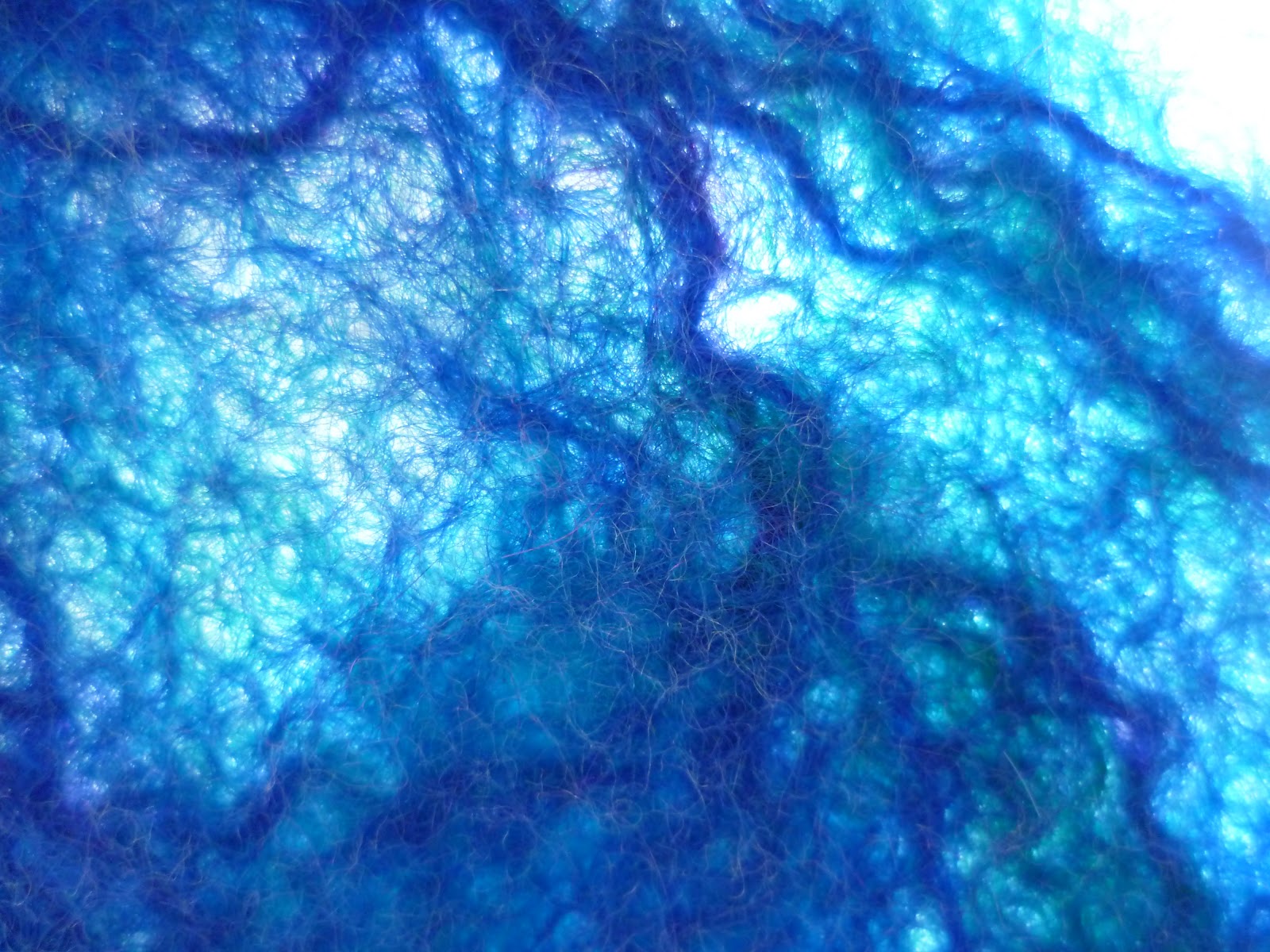 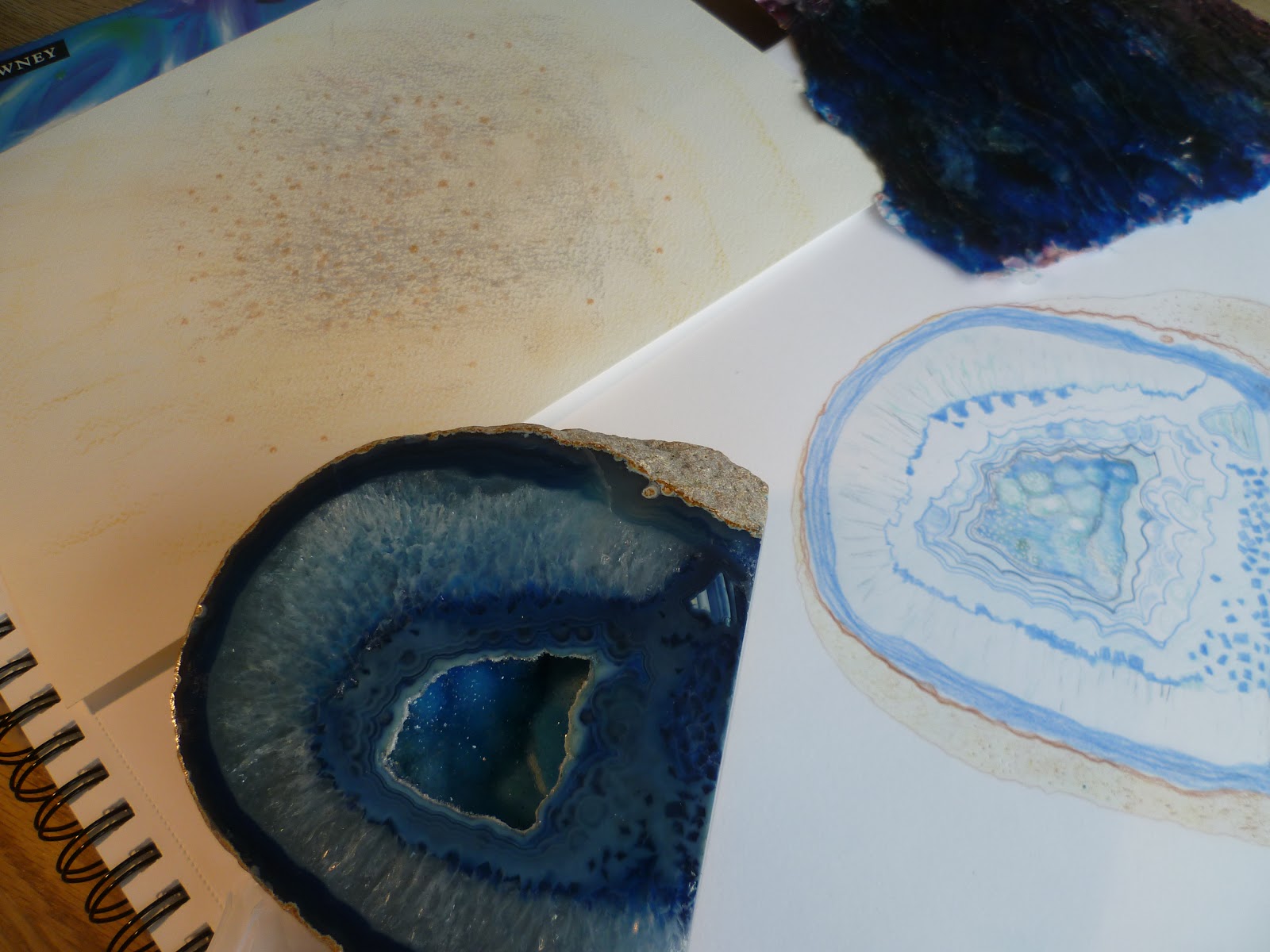 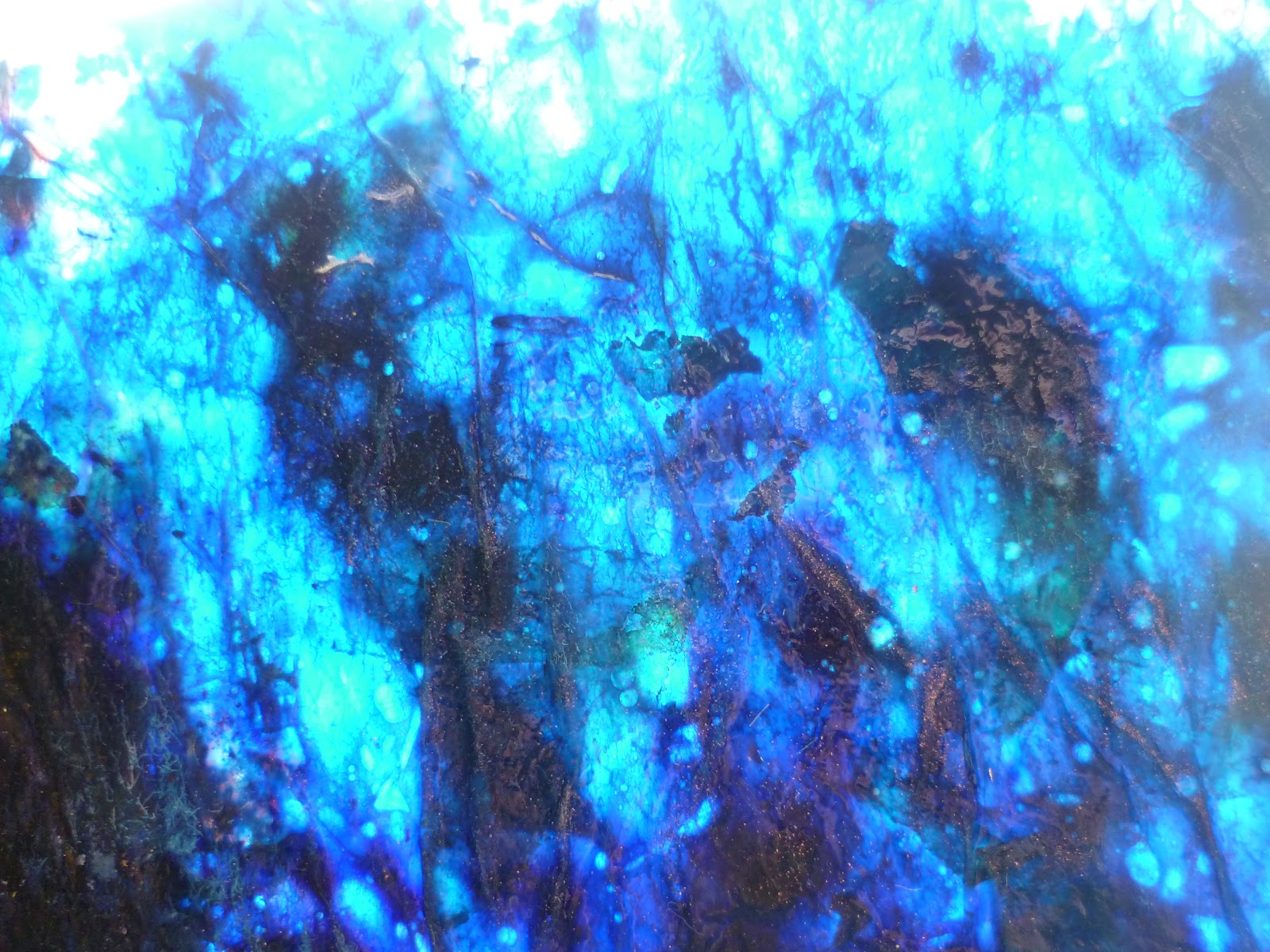 Finally, silk painting. First I tried out the paints on a piece of silk with a pre-printed outline that was really effective at keeping the paint within the design.  Essentially it was colouring in, but it was a good way to start something that was completely new to me. I found only a tiny amount of silk paint went a very long way and that the paint dried paler than I was expecting, so two or three layers were needed. To get a paler colour the paint was simply diluted.  I enjoyed mixing my colours, which seemed to stay fresher and clearer when mixed than the acrylic paint I am used to. On the larger areas I found it quite difficult to get a flat colour.  If I used too much paint it would flood over the boundaries of the design but if I tried to go slower and more carefully, the colour would start drying and I'd end up with a kind of watermark where the wet and dry areas met.  I tried sprinkling coarse sea salt on the wet silk.  The salt soaks up some of the paint to give a mottled effect.  However I wasn't sure how to get the salt off again.  Maybe I had too much paint on but it seemed to stick to the surface.  When I tipped it my paint ran.  In the end I waited till it was dry and brushed the rest off. 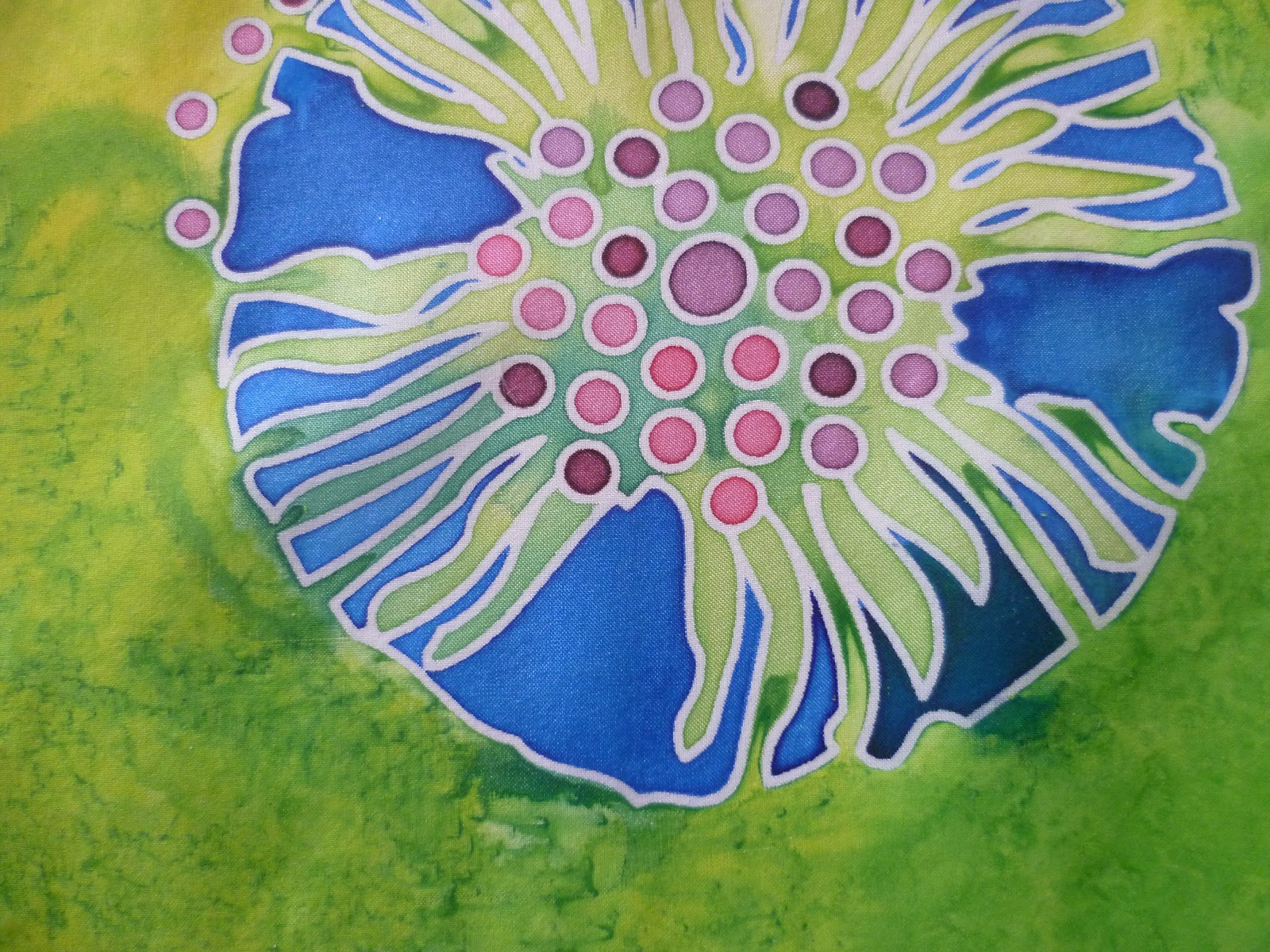 Next I had a go drawing directly onto silk with a tube of gold gutta.  I'd been to see the Lion King at the theatre, which was a wonderful visual experience and I wanted to create an African style design to remember it by.  Like the batik wax, I found it difficult to control the flow of gutta.  Getting a regular thickness on my line was tricky and once it dried and I started painting I realised my lines were broken in places as the paint was bleeding through.  I also noticed that where I'd pinned the silk to the frame there were runs in the silk.  Altogether I enjoyed felting and batik much more and found my experience of silk painting frustrating, unforgiving and fiddly.  However, I'm not ready to discount the technique yet as I think it would lend itself to the watery seascapes and transparency I love. The adult education centre is hoping to run a silk painting class soon so I've signed up.  I've invested in some specialist 3 point silk pins and found plenty of online video tutorials. 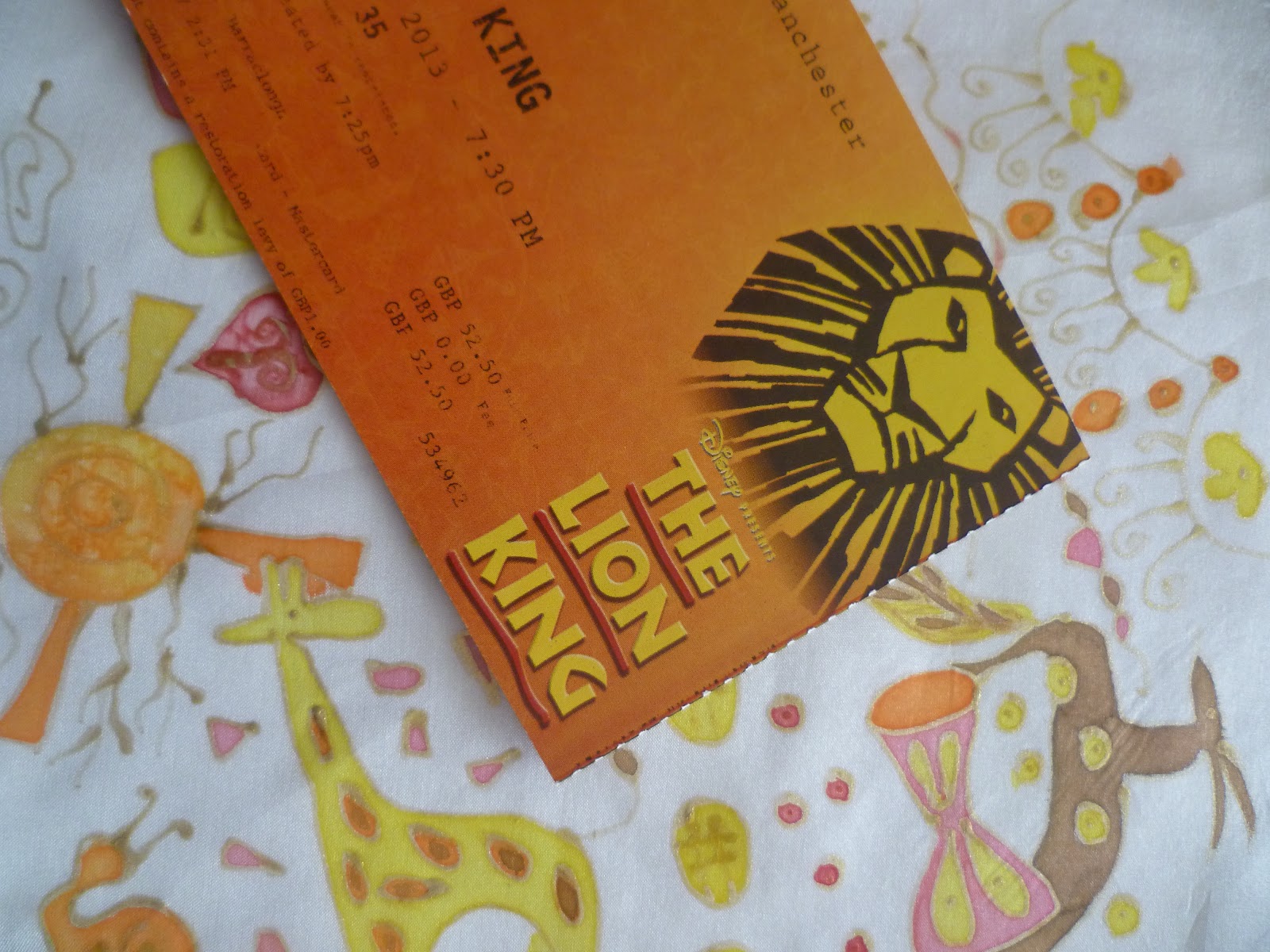 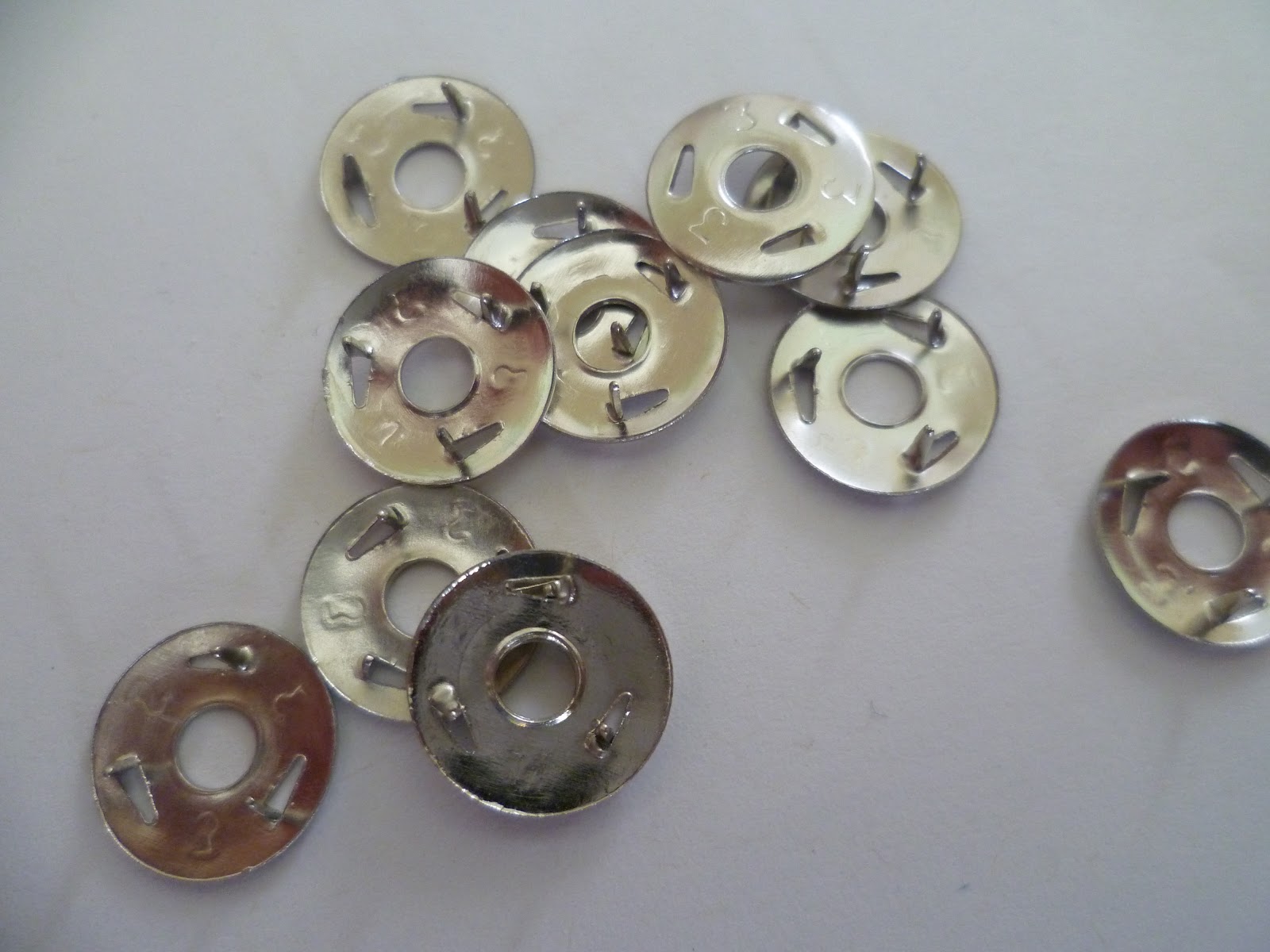