Before I went too far developing my nuno-felting intentions, there was one major concern I needed to address: - will the oxidised surface of the rust prints prevent the wool fibres penetrating the base fabric?  My next step was to try a feasibility sample.

It was also an opportunity to try some of the ideas I've had in Stages 1 and 2.  I cut a section off one of my rust dyed cloths - an open weave cotton that is large enough to be the potential base fabric for my final piece.  I looked through my colour schemes from Stage 2 and found one with a similar shade to the rust tones on the cloth, and choose merino wool tops in chocolate and mint, along with some neutral un-dyed Wensleydale from the same scheme.

I wanted to try trapping and cut lengths of my rust dyed silk and wool threads and some gold coloured Anchor 'Wash + Filz-it!' from my yarn stash.  I also had a small piece of rust-dyed tutu net that I imagined being a 'window' allowing glimpses of trapped items. 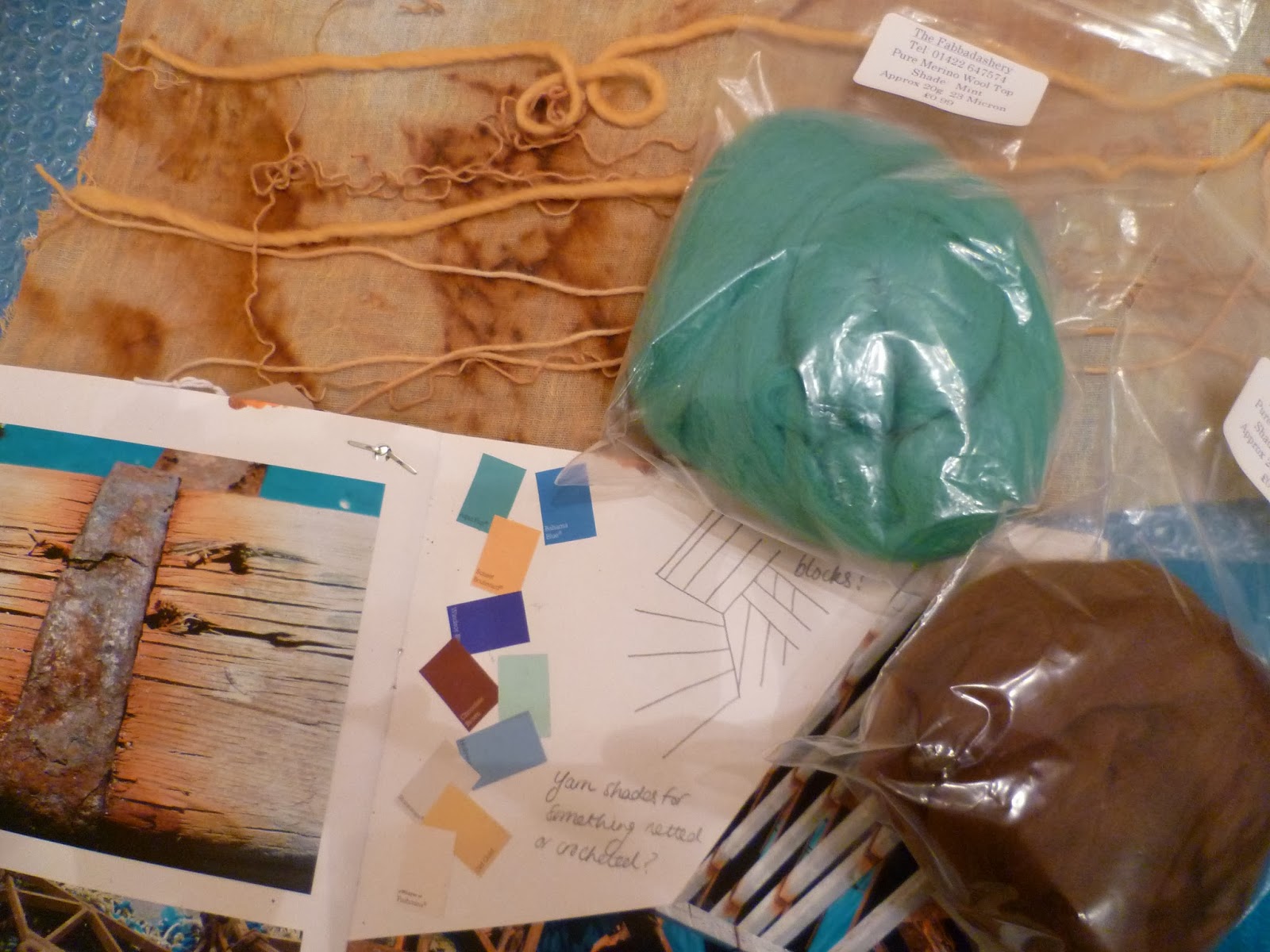 I laid the fibres and threads out on the base fabric (approx. 40cm x 12cm), trying to keep the merino fibres in thin continuous lengths.  I was hoping to achieve a rust-like surface combination of bubbling and striation. On one edge, I encased the base fabric in wool fibre, the other was left raw (my intention was to achieve a puckered frill). 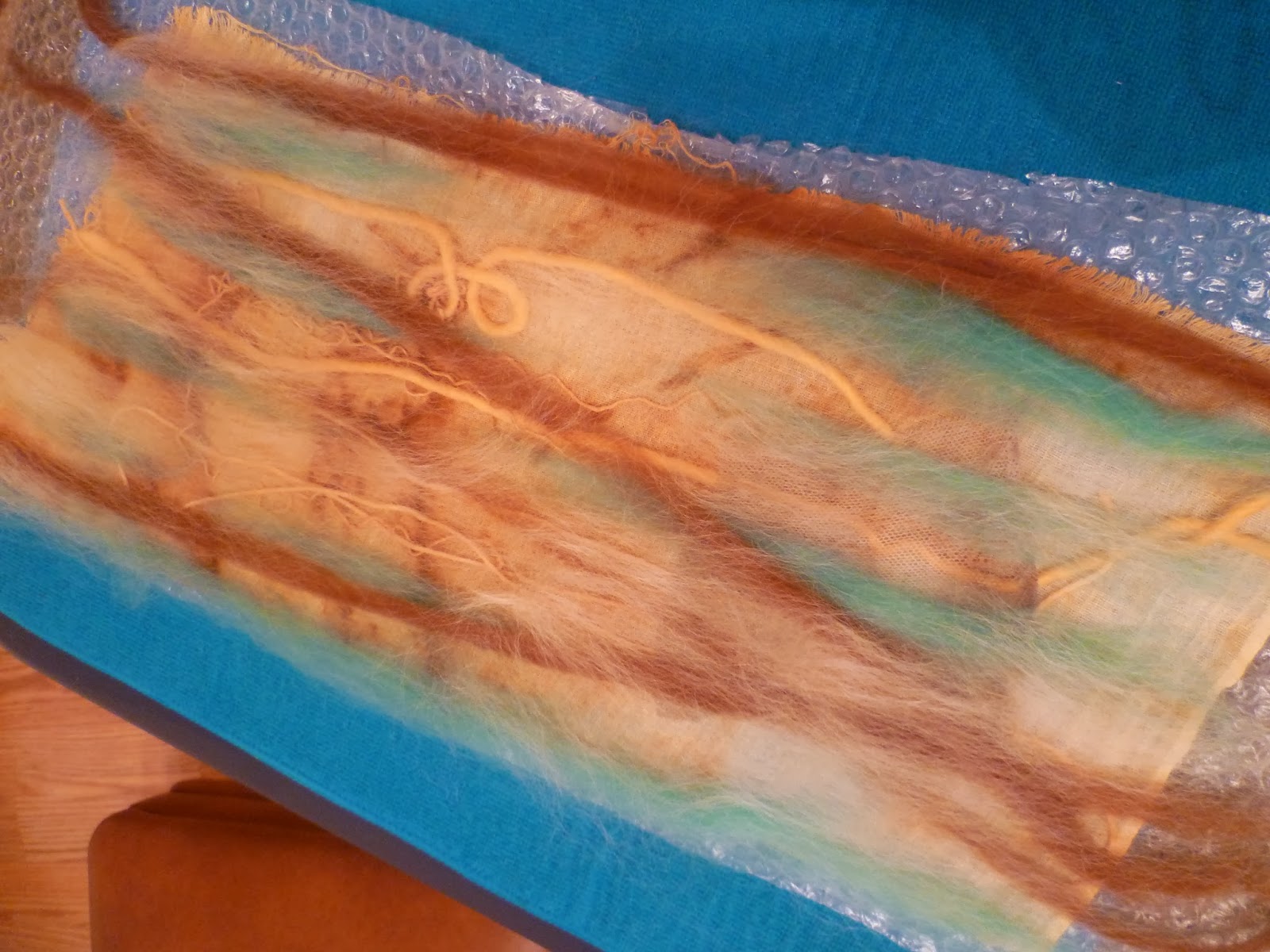 ﻿
Using the techniques learnt at the workshop, I worked on the fibres, which appeared to be successfully penetrating and adhering to the cotton base.﻿
﻿ 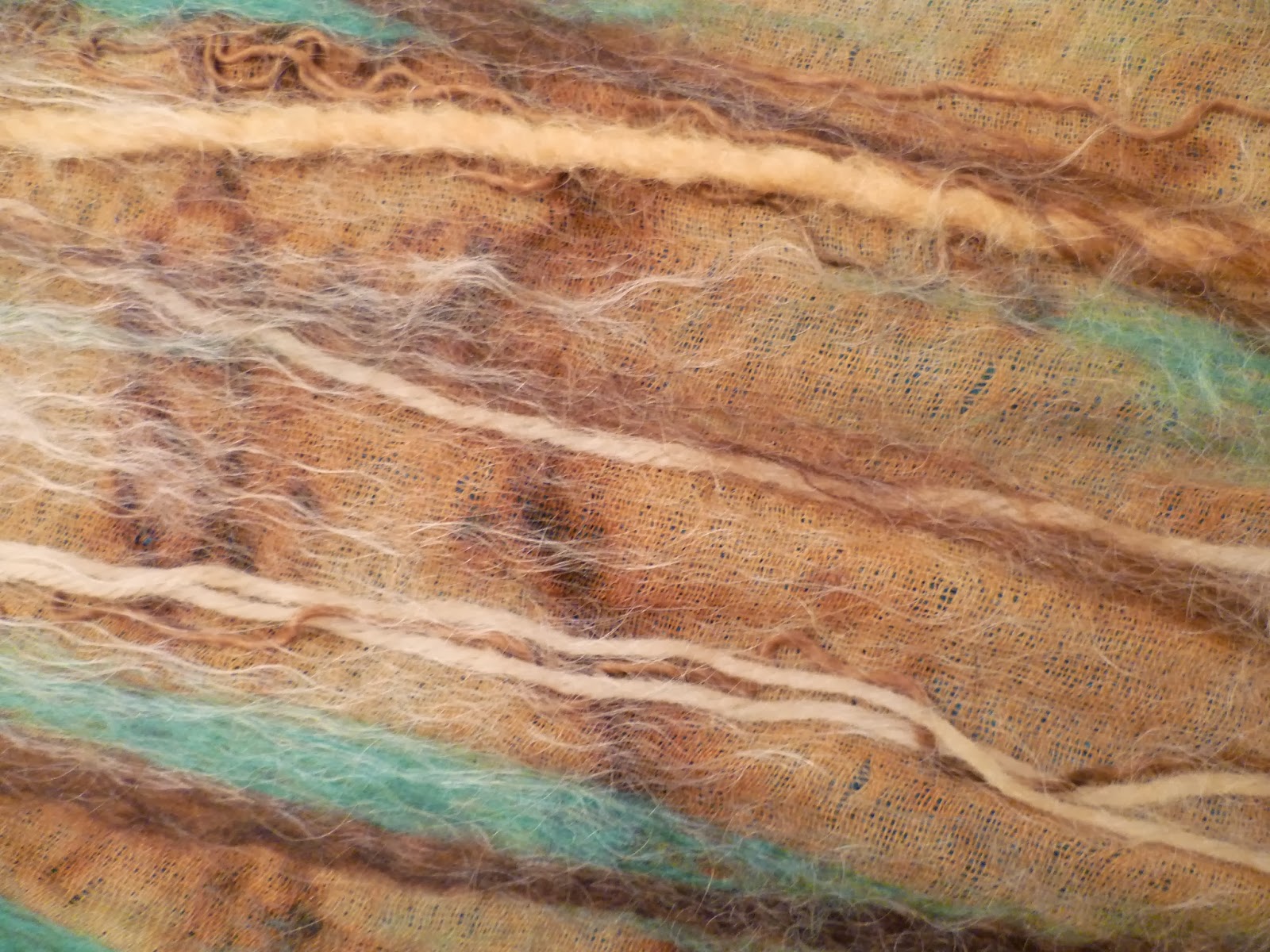 You can just see the tutu net in the photos below.  In hindsight, I saw that it needed even fewer fibres to secure it, I could have just laid them over the edges if I wanted to achieve a less obscured view of what was trapped under it.
﻿ 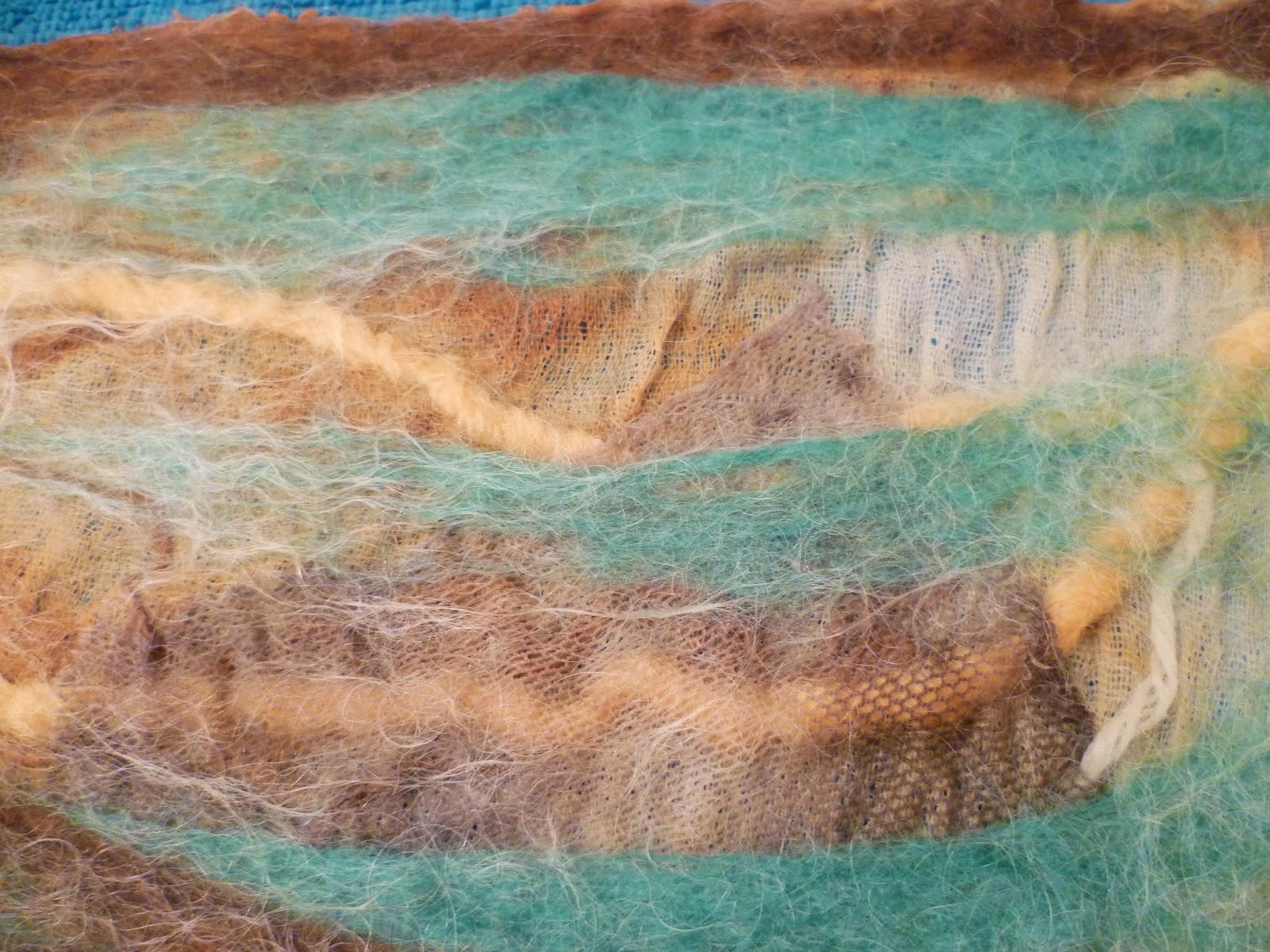 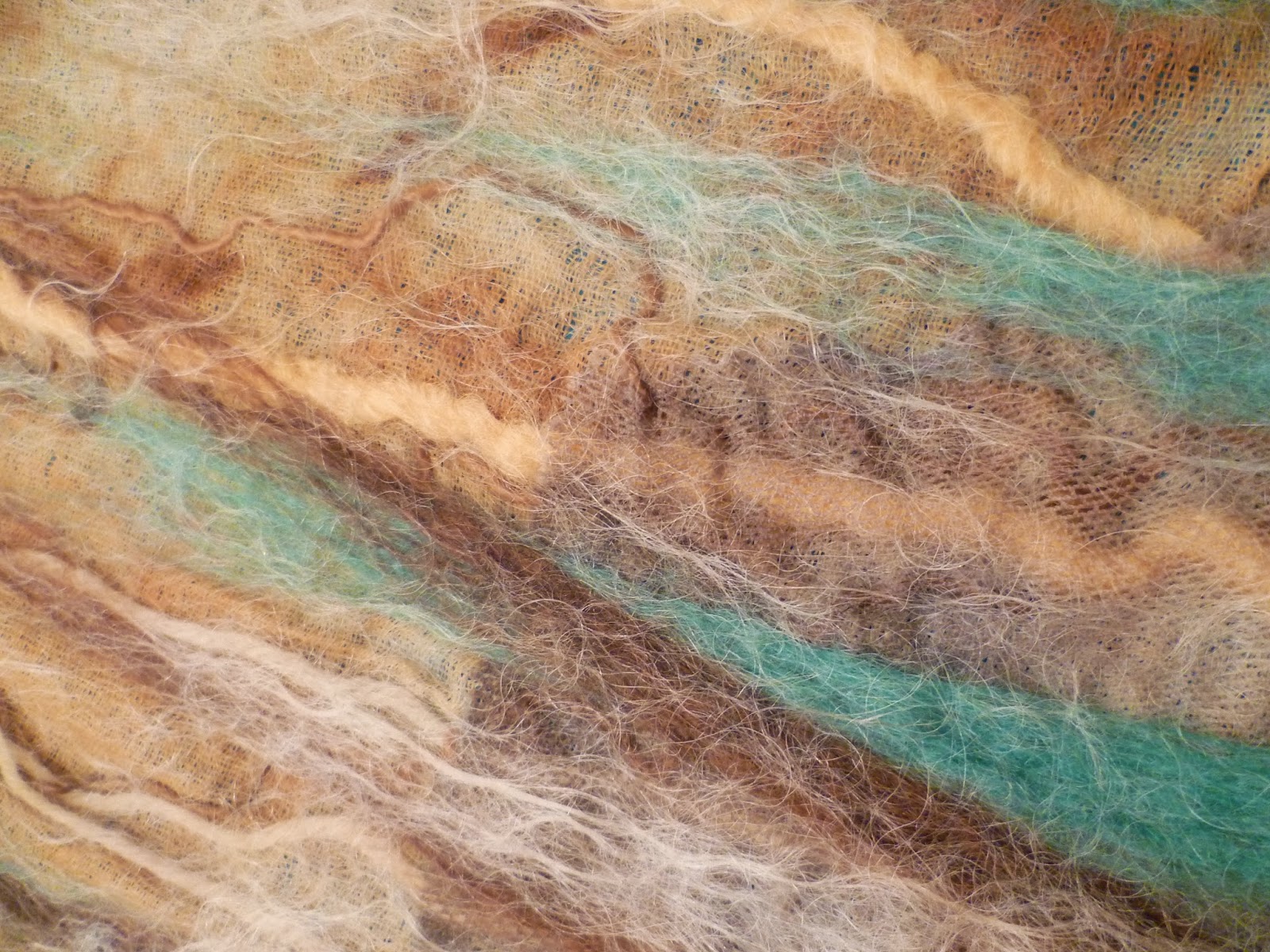 After a good deal of pummelling and rolling, I was really pleased with the colour blends and the striations.  The darker brown silk threads in particular were giving the impression of cracks that I was after.  However, the gold wool yarn, particularly where I had looped it, was too thick and the Wensleydale fibres were not adhering either.  They were coming away from the base fabric when I gave a gentle tug. I concentrated on these areas but it didn't seem to be making any difference.  The yarn was felting, but to itself rather than the base fabric, which was showing no sign of puckering yet. 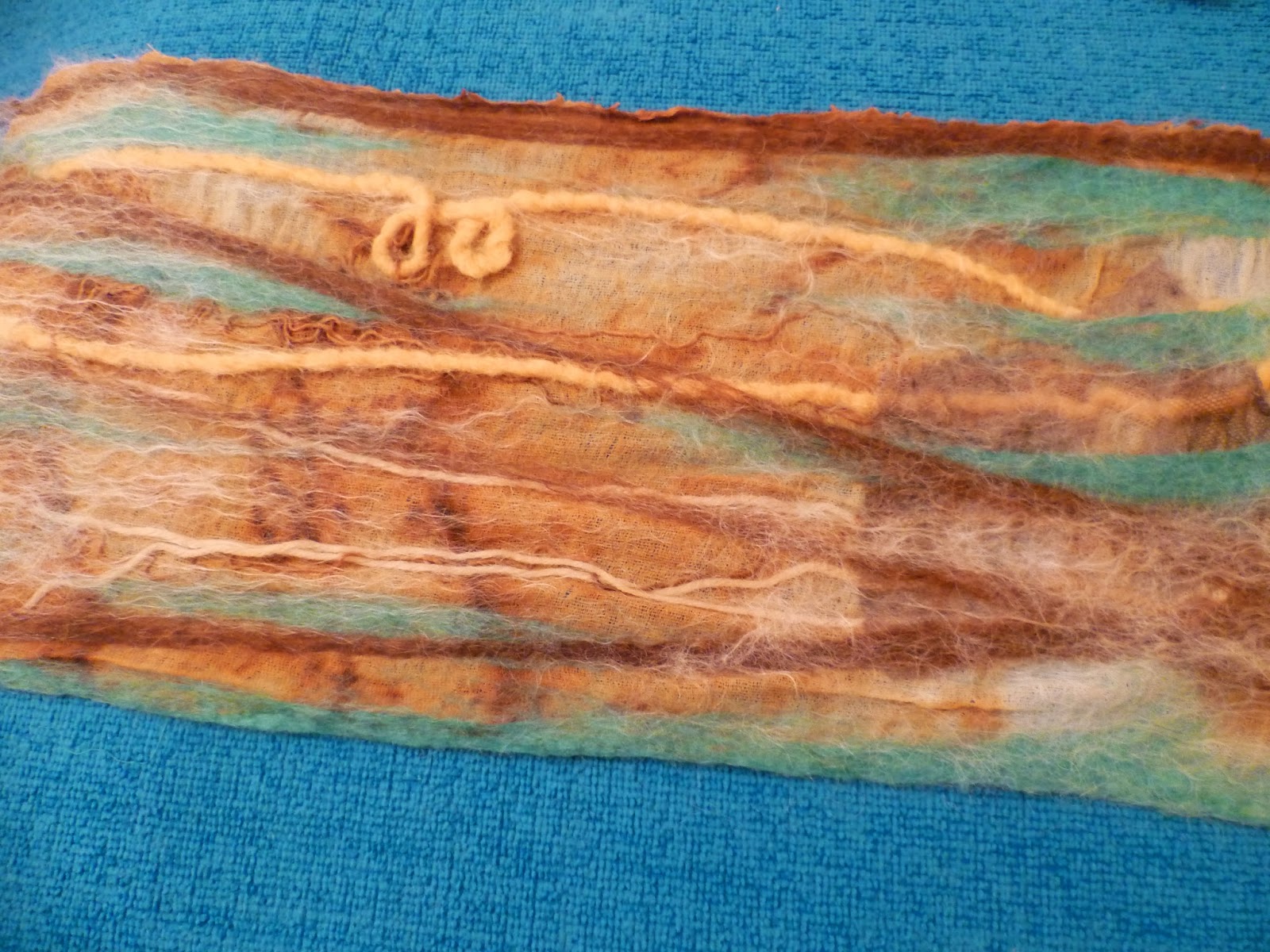 Eventually, I concluded I was either going to have to leave it with partially adhered fibres or try adding merino over the top.  I thought I'd leave it and move onto the fulling stage, but as I rinsed the sample, the gold yarn was moving position so I added a fine layer of merino over the loose areas and went back to the wetting and rolling stage again.  This worked in terms of securing the fibres but I'd lost the lightness of drape, the colours no longer glowed and the rust marks were completely obscured.

At the fulling stage, very little seemed to happen - minimal shrinkage and very slight puckering, nowhere near the textures I was after.  Had I laid the fibres too densely, was the rusted surface hampering the process or maybe I'd just run out of elbow grease? 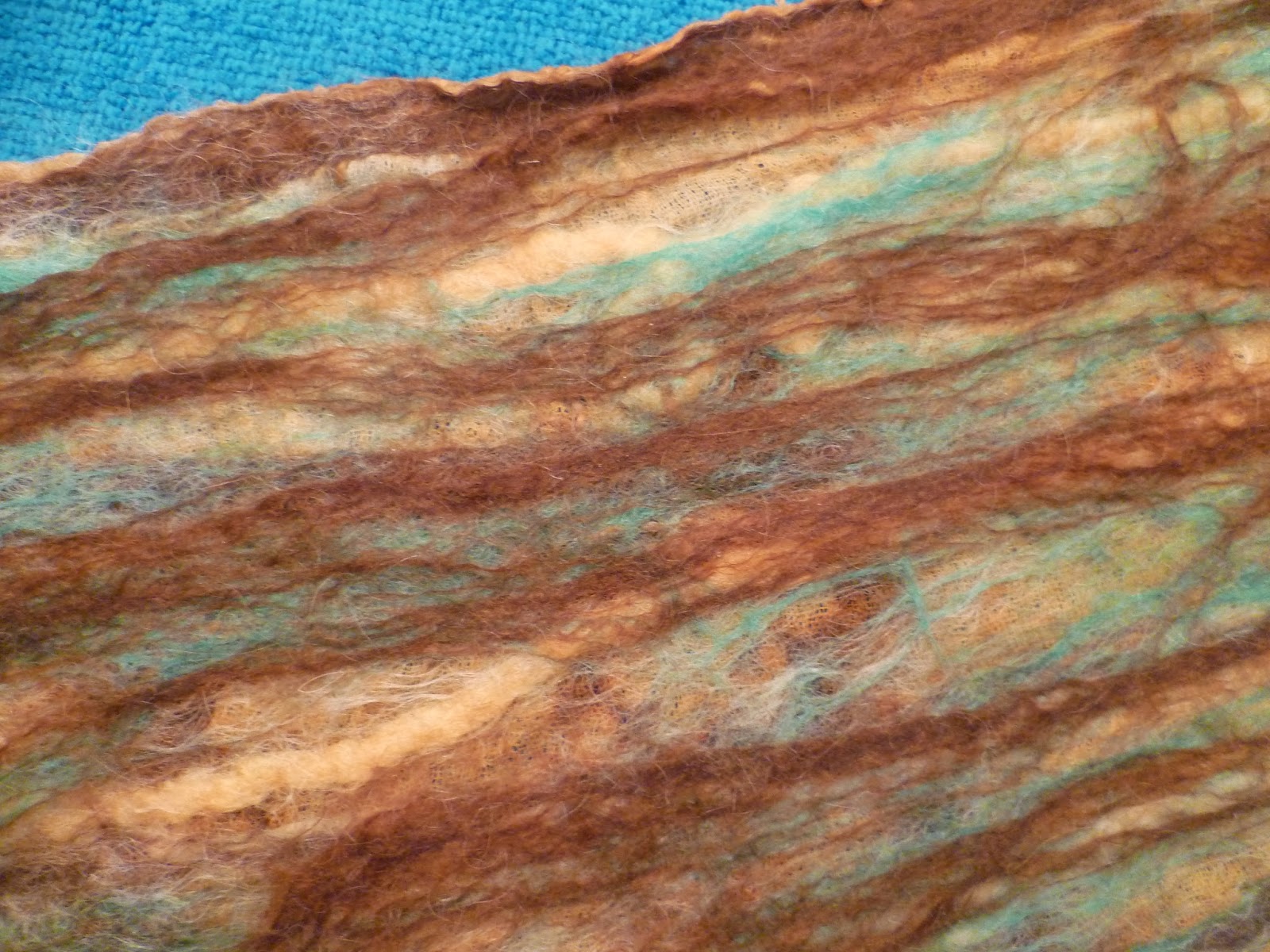 I wasn't precious about the sample so I put it in the washing machine overnight with my normal wash load at 40.  It was 1/4 original size when I took it out, heavily felted, the front had partially stuck to itself and it was just plain ugly!
﻿ 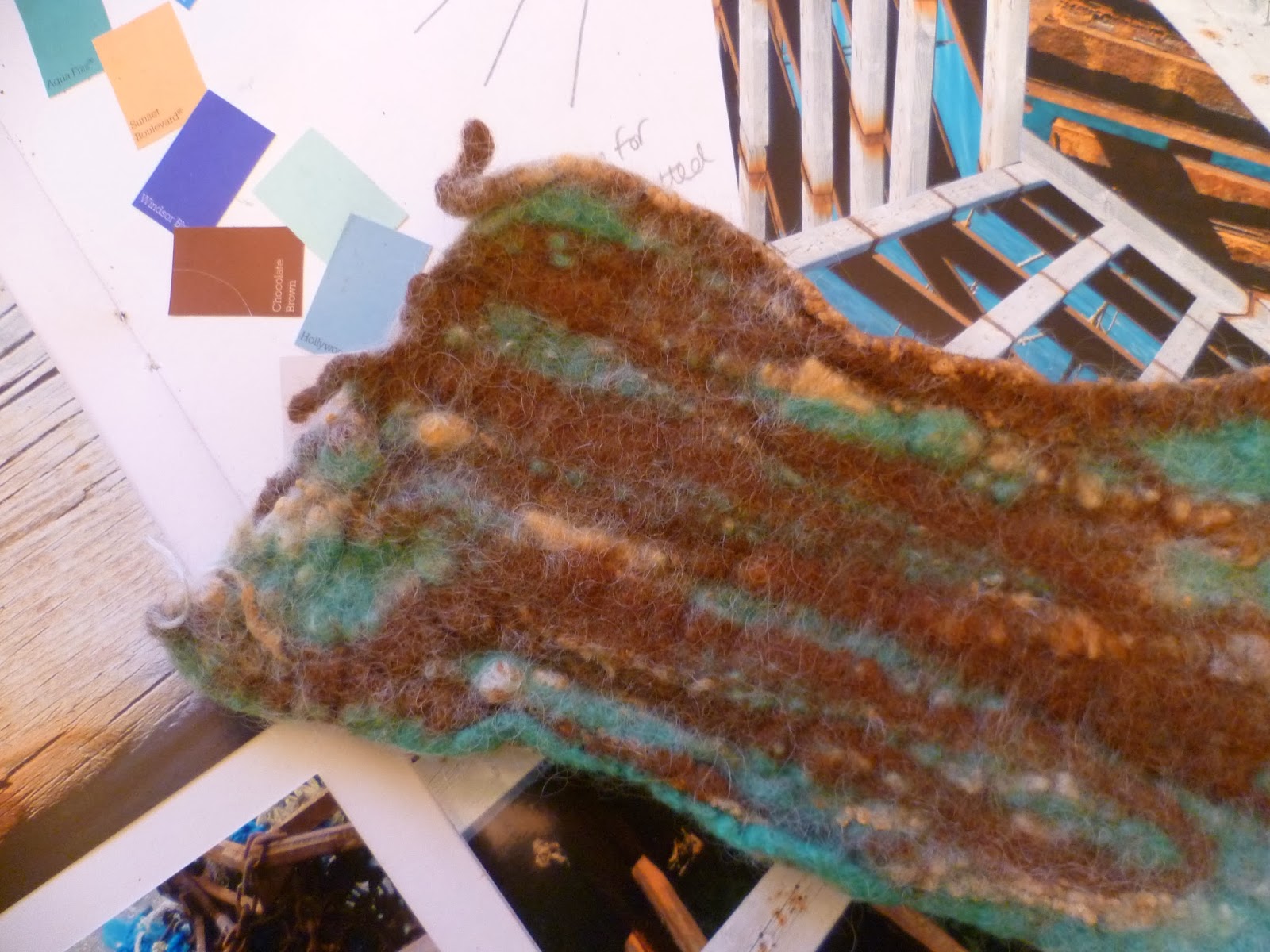 However, when I turned it over, the combination of bubbled texture and blended colours were just what I was hoping for.  There were lovely organic edges and I could still see striation but in a much more subtle way, with meandering raised ridges and sunken areas adding surface dimension. 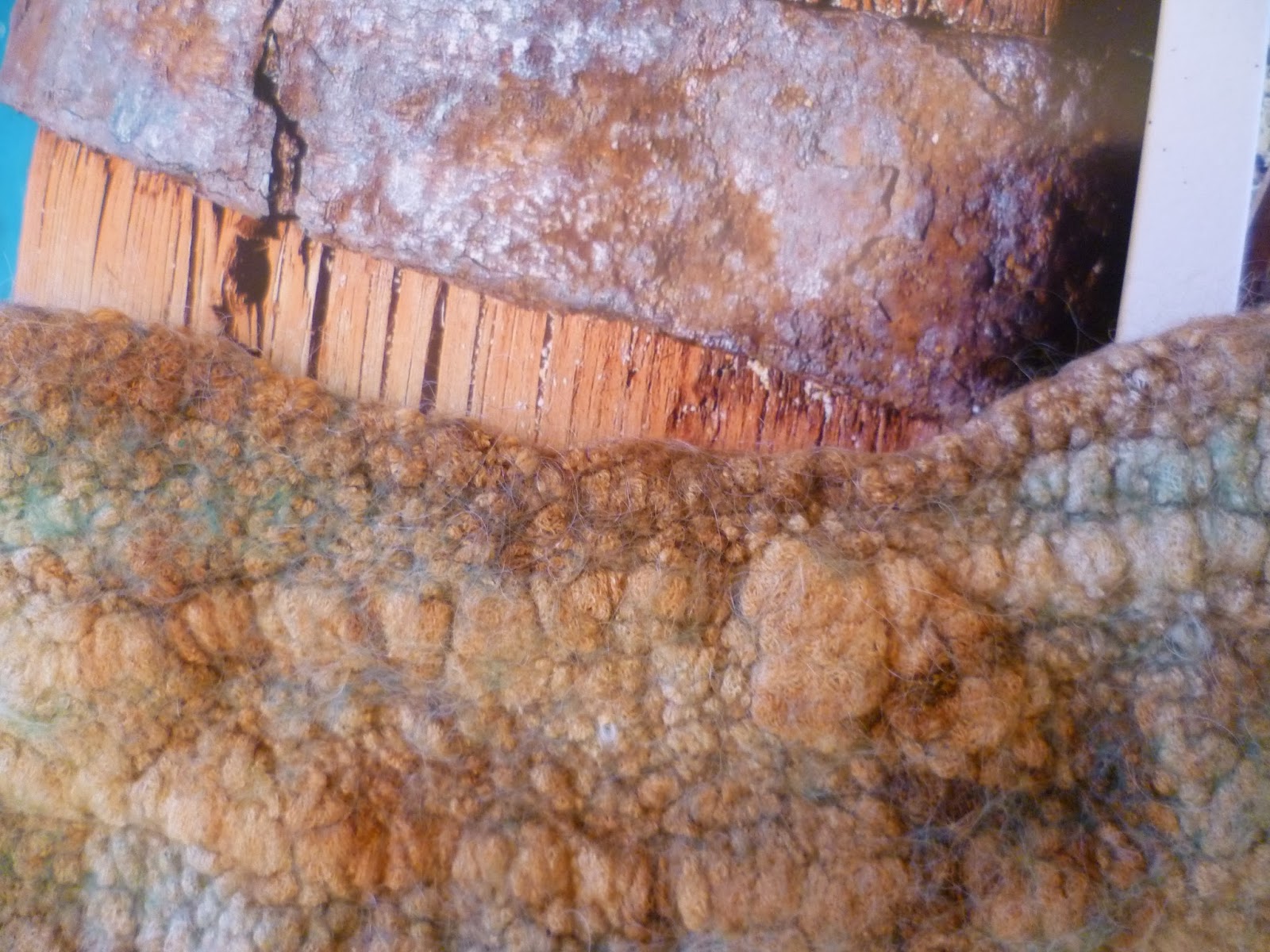 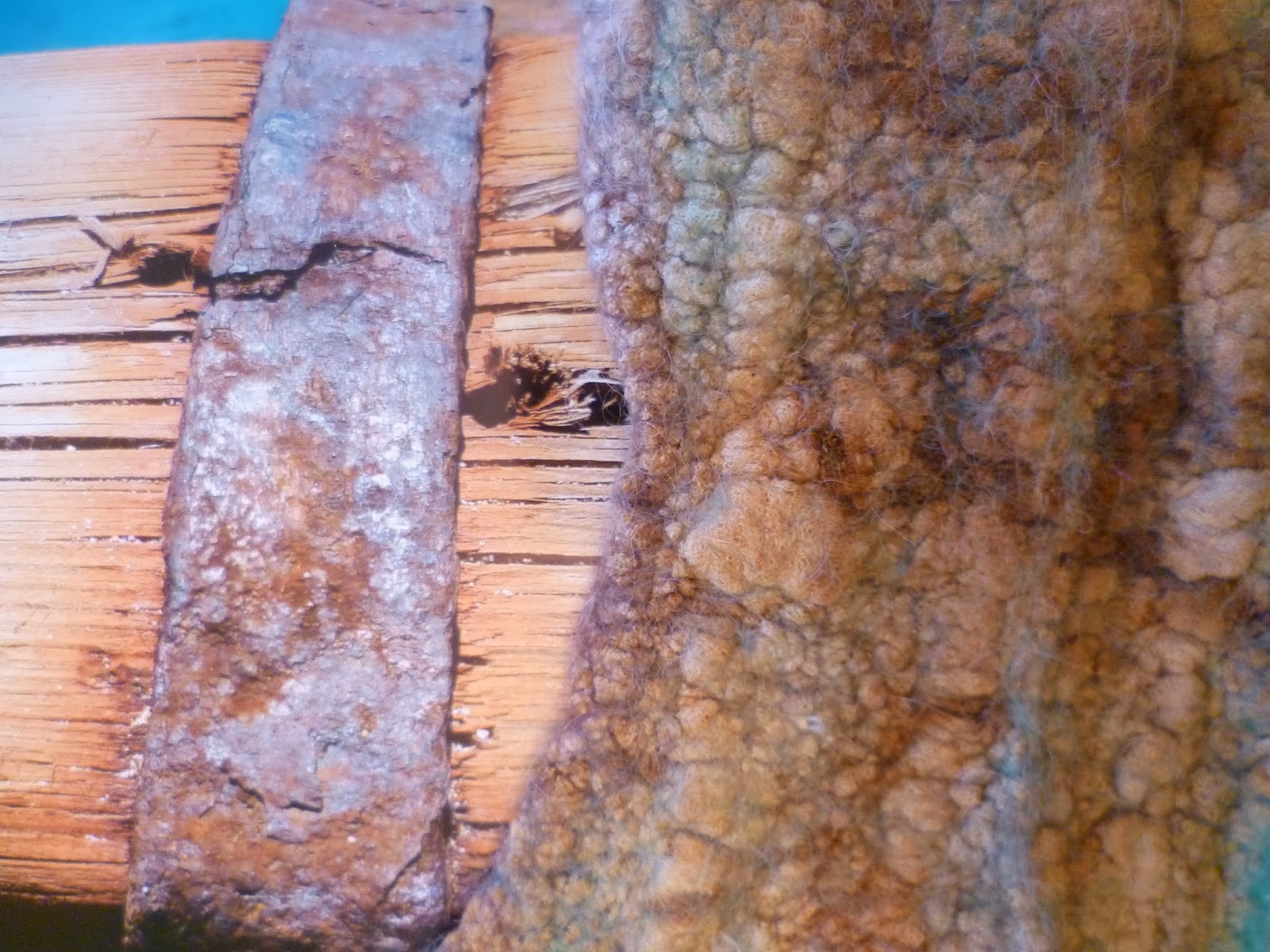 So, I have learnt a lot by here, but I have problems I need to iron out by further sampling.  The back can maybe become the front, but can I achieve a similar texture with more drape and without the extreme shrinkage?  If not perhaps it will lend itself to a smaller more decorative object.  When I curled up the sample, I liked how there was just a glimpse of the contrasting inside texture and colour and I imagined it as a cuff or some sort of vessel, rather than a scarf. 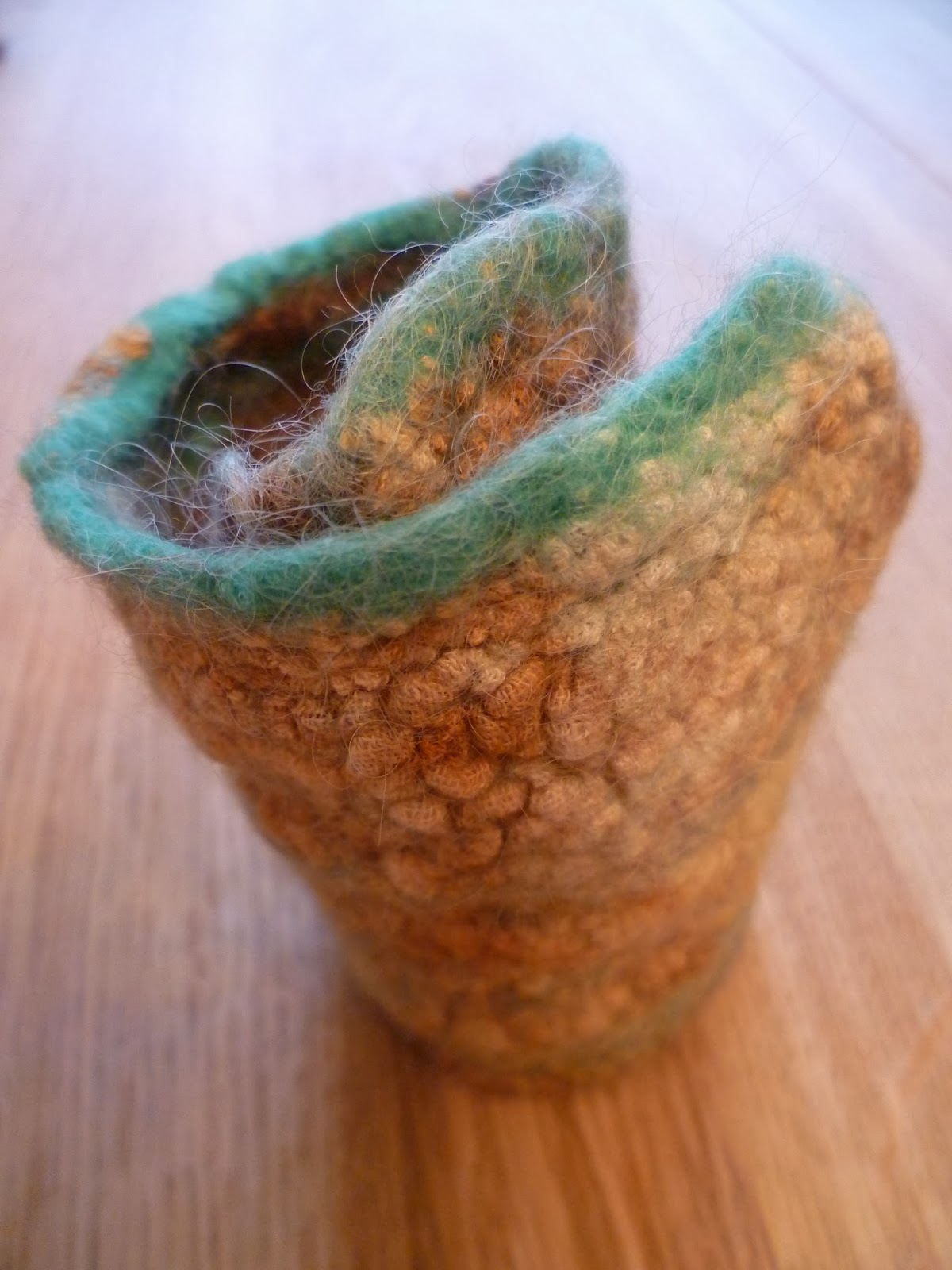 The original print marks are still visible but have lost their definition.  For the large base cloths I have in mind, that are lightly rust stained rather than really encrusted, that's alright though for this project.  My focus is on texture, then colour, rather than shape.
The rusting doesn't prevent nuno felting but I suspect it makes it more difficult, and more time is needed, especially in the early stages, to make sure the fibres have penetrated. Perhaps I need to look at ways to create more friction.  I've seen videos of electric sanders being used for nuno felting, though I'm afraid of being electrocuted! I'll stick with the merino tops in future. I noticed this new batch of wool tops I've bought says the merino is 23 microns, whereas the Wensleydale is 45, proving that it's coarser and explaining why I had difficulties getting it to adhere. Most of my older stash is unlabelled so I'll have to make choices by instinct and 'feel'.  I do have a bag of possum fibre blend though which I've just been researching.  It's described as 'superfine' at around 16-17 microns so has great softness and insulating properties due to the hollow construction of the fibres.  It's considerably warmer than merino and cashmere so could be a great choice for a scarf. I only have it one shade though and not surprisingly, it's a bit difficult to come by in the UK!
﻿
Posted by LizzyB at 05:34