My frame is warped up again ready for the final stage of Assignment 4, but I felt like I needed a break from weaving before I began again. I've been thinking a lot about my final project and wanted to spend time working on my rust theme.  It's been very tempting to dig up the rusted objects I wrapped and buried during Experimenting with Structures but I know the longer they are left the better to achieve strong prints, so instead I joined up with the workbook group run by local textile artist Anne Brooke.  Weaving's been quite a solitary experience and I wanted some company.

As we were meeting indoors and all my rusted objects are busy printmaking, I searched on Pinterest for 'Rust' and printed a few images to attempt capturing their colour and texture using some of my favourite mediums: acrylic paint and paper.

For this first image, I printed through a plastic doily using orange paint then sponged on gold and browns for depth of colour.  I was debating how to achieve the crusty edges of the blue peeling paintwork and Anne gave me a piece of teabag paper to try that she'd bought at the Knitting and Stitching Show. I painted it, then scrunched and tore it and ran my nails around the edges to make them craggy and irregular.  Teabag paper seemed a bit resistant to glue and it took a great deal to stick it down! 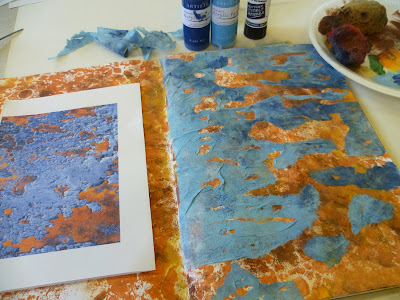 Since I photographed this, I've added touches of darker blue paint to highlight the raised areas.  I may add some acrylic wax to the blue surface too and add further detail with pen.
Anne had a wide range of materials for us to try and I created this page below using only a finger stamp with a simple design of circular dots. I dragged the paint down using the stamp then added the blue and brown texture by varying the angle of the stamp and the load of paint. 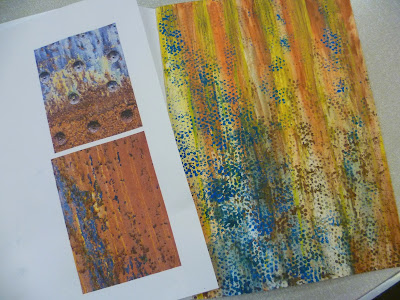 Obviously I hadn't captured the rust colours well before adding the blues and browns so I worked over the top with pencil crayon.  This helped take back the brightness a little and the crayon caught the raised areas of the dots, making them two tone and more dimensional.
﻿ 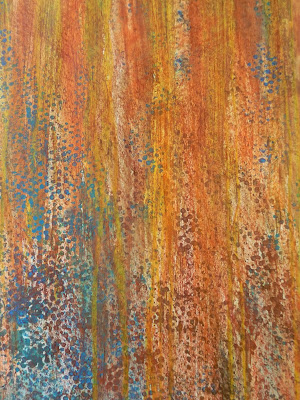 A while back I bought damaged coffee table books with satellite images taken from above earth and these are my favourite source of paper for mixed media.  I love the textures of the topography and used strips of the images for this paper collage.  ﻿ 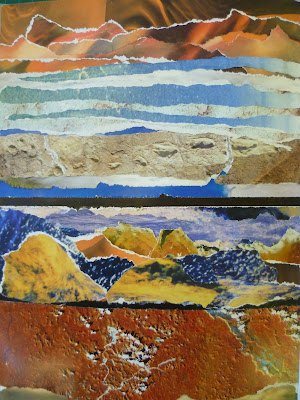 Some of the edges looked a bit harsh I felt, so I used the same dotty finger stamp to print and blur them, adding texture. 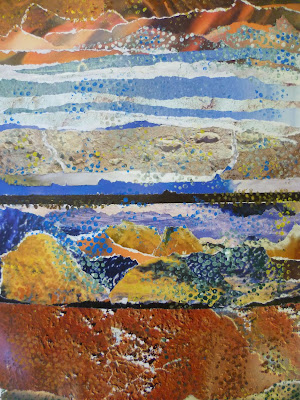 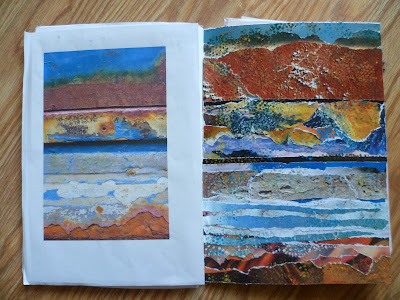 When I stood back later and looked at this, it felt familiar.  Eventually I realised that there was actually quite a strong resemblance to my weaving, which I'd always considered seascape rather than rust inspired, though of course rust is rife at the seaside.  I was weaving the colours and shapes by instinct before I'd ever seen this image though. Surely the similarities are more than a co-incidence? I assume that I've chosen this image because I still had the weaving in my mind. 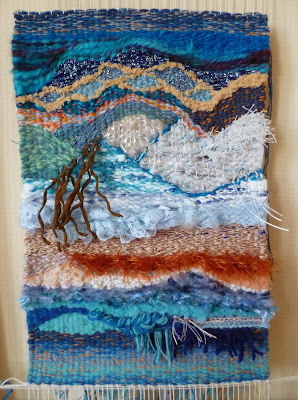 Below are some more of my Theme Book pages created during the last few weeks to generate ideas:
When I was on holiday, to the embarrassment of my family, I began noticing and (risking my life standing in the road) photographing the surprising variety of patterns on manhole covers. Before long, the kids were joining in with the spotting though; "Here's a new one Mummy!", "Ooh, have you seen this one yet Mummy?"  On this page I was trying out some spray inks and sponging and overprinting with shapes carved from erasers.  I've thought about making a photo collage of the patterns and drawing boxes with different manhole patterns in each square to see how the simple shapes sit when adjacent to another. 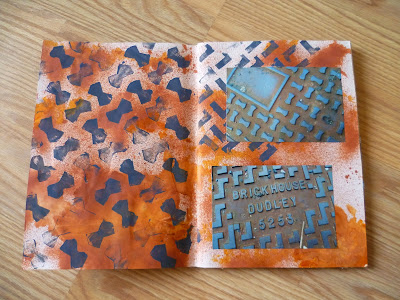 This next page is still to be added to.  I like the simple shapes of rusted rivets, and the washers that I've been using in some my rust printed fabrics.  These stamps are made using a button stuck on the end of a wine cork dipped in acrylic paint and I like how they don't come out quite cleanly giving a sense of disintegration. 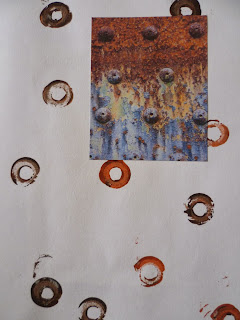 Below is an oil pastel drawing of a rusty beam under a bridge I saw in Slovenia.  I struggled to achieve the raised effects of the peeling paint until I stuck on small pieces of torn, crumpled paper. I like how the surface of oil pastels can be scraped away to reveal a colour underneath, a technique which I've used to show textures of surface cracks. They can also be used thickly and blended for smooth areas and lightly on their side for a powdery effect. 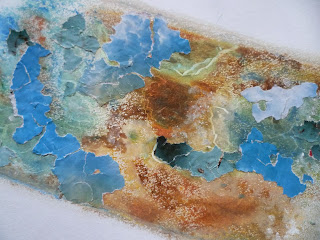